Blyth Spartans are sorry to announce that midfielder Stephen Turnbull is to leave the club.

Despite being a mainstay in the squad so far this season, the 30-year-old will be leaving to take up full-time employment.

And while the midfielder is happy to be taking to the seven seas once again, he will do so with a heavy heart – after departing a club he has enjoyed three spells at during his career.

Turnbull admitted: “I love it at Blyth, but I’ve got a job as Third Officer of the Watch on a cruise ship and, on February 10, I’ll be flying out to New Zealand to start the cruise. I will be back from time to time, but it is largely the end of my football career.

“I’m devastated to be leaving Spartans, but I’ve trained for four years to do this and I have to give it my best shot.

“My brother Phil left full-time football to go into teaching and it was a big decision, but he says now it was the best one he ever made. We both have had to think about our futures.

“I have to say I was really upset after the game against Matlock. It was my last game at Croft Park and I was genuinely upset in the car going home.

“It’s the end of an era for me, but I hope to be in the squad on Saturday and next Tuesday.”

‘Twinny’ added: “I’d like to give massive thanks to the Blyth fans and the board of directors, who have given me their continued support over all the spells I’ve had at Croft Park. Blyth is a magnificent club.

“I’ve totally loved my football here. My time at the club has given me my greatest memories in football and, of course, our FA Cup run that saw us play Hartlepool United and Birmingham City was unbelievable.

“That run was all down to Tom [Wade] and I’d like to thank him hugely. He enabled me to enjoy my football again and I loved playing under him.

“I must also say how much I’ve enjoyed playing with the current squad – Robbie [Dale], Hooksy [Neil Hooks], Nipa [Daniel Maguire], Hutchy [Ryan Hutchinson] and the rest of the lads.

“I must also say thanks and good luck to the new management trio of Alun [Armstrong], Daz [Darren Holloway] and Hooksy, who are doing an excellent job. They can win the league this season without me.” 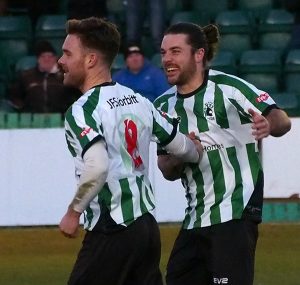 Discussing Turnbull’s departure, Spartans’ general manager Ian Evans said: “First of all, may I wish ‘Twinny’ all the best in his new job. It is a job that he could not turn down and the club fully accept his decision.

“Secondly, the club wish to go on record in thanking him for his tremendous service during his three separate periods at Croft Park.

“He has written his name in to Blyth Spartans’ – and indeed FA Cup – history with ‘that’ goal he scored against Hartlepool, but we should never forget his all-round contribution to the club.

“Stephen has never given less than 100 percent in any game and was a joy to watch as he controlled many a game from midfield. A truly classy and committed player.

“We wish him the very best for the future and I’m sure all Spartans fans will do too!”