Manager Alun Armstrong has lauded Robert Dale for his performance on Saturday afternoon – after the Spartans’ captain came off the bench to inspire a 4-1 win over Matlock Town and extend Blyth’s lead at the top of the Evo-Stik Premier League to eight points.

With Luke Armstrong’s second half strike cancelled out by Marcus Dinanga a minute later, the game was poised at 1-1 when Dale made his way onto the Croft Park pitch with 20 minutes to go. The talismanic winger went on to have an instant impact for the home side, as he restored Spartans’ lead just nine minutes later.

A rampant Blyth then ran riot following Dale’s deflected effort – as Jarrett Rivers and Daniel Maguire found the back of the net, to compound Matlock’s misery and claim all three points for Armstrong’s side.

However, the 41-year-old had nothing but praise for his 70th minute substitute, who was still able to turn the game on its head despite not having fully recovered from a shoulder injury picked up in the 7-1 win over Mickleover Sports seven days earlier.

Armstrong said: “I’d been in contact with Robbie during the week, he said his shoulder was still hurting and he was still struggling.

“I’ve said to all the lads that, if any of them get a knock, I’d rather them miss one game than risk them and see them miss four or five. We’ve got Patta (Matty Pattison) and Lidds (Michael Liddle) out at the moment and I don’t want any more players missing.

“It was more precaution [to name him as a substitute,] as he was still sore and he couldn’t hold anyone off. I made the decision to put him on the bench and I told him ‘I’ll use you if I need you’.

“The game was set up nicely for him, it really was. I said to Hooksy and Daz [Neal Hooks and Darren Holloway, joint assistant managers] that everything was set up for Robbie to come on and score the winner – as you could just sense it from the atmosphere. 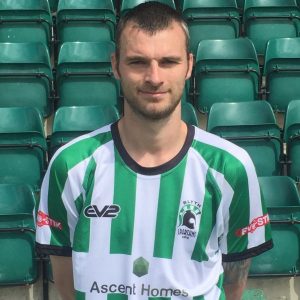 “It’s obviously just that connection that Robbie has with Blyth – as you can just sense that he wants to come onto the pitch and be the hero. Fair play to him, more often than not, he does just that.”

The club captain wasn’t the only stand-out performer for Spartans on Saturday afternoon – as Armstrong was also impressed by Man of the Match Rivers and the sensational goal he scored within 60 seconds of Dale’s.

Armstrong added: “It was a great little piece of build-up play for our third goal, but the way Jarrett struck it was unbelievable. It’s the first time I’ve seen him strike one as sweetly as that since I’ve been here.

“As soon as he hit it, we all knew it was in and he was already off celebrating. I was delighted for him.

“The kid has been fantastic since the turn of the year; absolutely outstanding. Not just his attacking play, but his work-rate off the ball is brilliant as well – as he wins the ball back for the team and he helps his full-back out.”

Having set up both wingers for their goals, Maguire got the goal that his performance deserved in second half stoppage time. Not only was it the “unpredictable” striker’s 14th goal of the season, but it also saw ‘Nipa’ reach the milestone of 100 goals in a Blyth Spartans shirt.

Armstrong admitted: “I didn’t find out it was Nipa’s 100th goal until Saturday night, so it would be nice for the club to do something for him to mark that milestone.

“His first half performance wasn’t at his usual best but, second half, I thought he made a massive impact. Once we got the first goal, he came to life after that.

“He got the goal he deserved in the end, but I thought he’d fluffed it at first – as he took a touch. That’s Nipa for you though, he always comes up with unpredictable football.”

And while Armstrong was happy enough at the final whistle with a sixth straight win and an impressive performance from his players, things got much better for the Blyth boss when he walked back into the dressing room – as he was told that his side’s lead at the top of the league had been extended to eight points, after other results had also gone their way.

Armstrong said: “It was more surprising than anything to see the teams near us all dropping points, it really was. I went into the dressing room before the game and said ‘the Spennymoor game is off, so this is a great opportunity for us to take advantage of that’.

“For me, Spennymoor and Stourbridge are the two that I think will really push us towards the end of the season, so the Spennymoor game being off was a massive incentive for us to try and get that gap a bit bigger.

“I wasn’t really bothered with everyone else – as I just thought they’d all win their games. I just wanted to come in at the end with the three points – so we could move on to the next game – and the lads did that.”