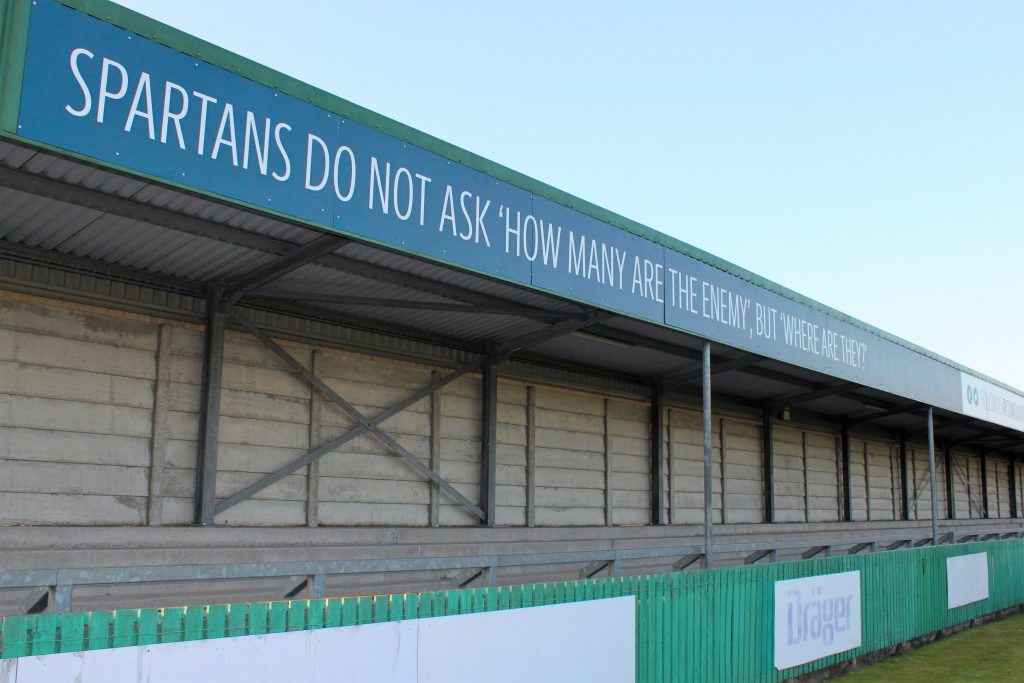 Blyth Spartans are delighted to have linked up The Commissioners Quay Inn, newly opened on Blyth Harbour for Summer 2016 and which coincided with the Tall Ships visiting in August.

The large billboard adorning the front of the Kingsway End of the stadium has already become a prominent feature, with many supporters commenting on the wording and the keenness of The Commissioners Quay to draw on the reputation and name of the town’s football club.

And Sean Donkin, Operations Director of the Inn Collection Group, was keen to take up the opportunity to link up with the town’s football club.

Sean said: “We jumped at the chance to kick off a partnership between The Commissioners Quay Inn and Blyth Spartans. We’re proud to be able to support a club with such heritage and performance acumen, but also one that enjoys such strong community links.

“The new billboard looks fantastic and we’re delighted it has been so well received by supporters. We would like to thank them – and indeed everyone involved in the Club for their support of The Commissioners Quay Inn since it opened in July.

“We wish Blyth Spartans every success this season and beyond.”

The jewel in the crown of Blyth’s impressive harbour development, the sleek new Commissioners Inn makes the most of every inch of its water’s edge location. Overlooking the River Blyth towards the sea, this vibrant and welcoming pub with rooms has all-day, every-day laid back dining, delicious drinks and 40 contemporary en-suite bedrooms.

A destination in its own right, The Commissioners Quay Inn really is the place to eat, drink, sleep and explore in Blyth and has already proved popular with players, committee and supporters of the Spartans.

The Inn is just the place to stay if you’re looking for bed and breakfast hotel rooms in Blyth, south Northumberland and Tyneside and is ideal for visitors to the area.