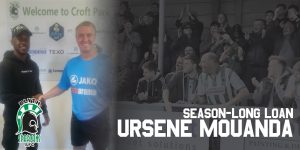 Blyth Spartans have completed the signing of central midfielder Ursene Mouanda on a season-long loan deal from South Shields.

The 20-year-old joins from the Evo-Stik Premier side having made 26 appearances for Graham Fenton and Lee Picton’s men last season.

Born in Ivory Coast, Mouanda moved to the North East when he was five years old and had previously trained with Newcastle and Sunderland.

However, it was the Monkseaton Football Academy where Mouanda caught the eye, prompting Rangers into taking the youngster north of the border in 2016.

After spending a year in the Gers’ development squad, Mouanda remained in Scotland but joined Kilmarnock – manager Lee Clark’s former club – after impressing in the PFA Scotland exit trials.

He reunited with former Spartans Fenton and Picton at The Mariners in 2018, who coached him during his time at the Monkseaton Football Academy.

The Ivorian has been described as ”particularly adept at breaking up play and helping his team launch attacks.”

While Clark and Mouanda’s paths did not pass at Kille, the pair will link up at Croft Park this season, first of which could be in tomorrow’s home friendly with Stranraer (3pm kick-off).