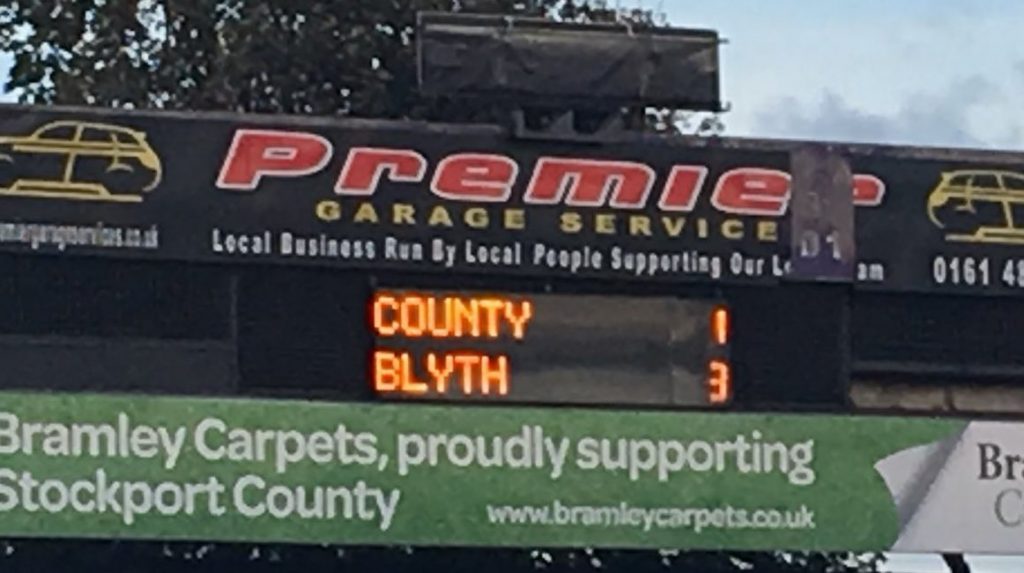 County had taken a 30th minute lead when Sean Reid was adjudged to have handled the ball in the penalty area, Matty Warburton converting with aplomb.

Spartans responded within 120 seconds, Adam Wrightson finishing clinically from six yards out – after a great footwork and vision from Dale Hopson.

Then – deep into stoppage time at the end of the second half – first Liddle with a calm finish after chopping onto his unflavoured right foot, then Rivers stroking home the rebound from a Hinchcliffe save secured the three points for the visitors.

In the first ten minutes it could have been so different as Stockport started the game at a frantic pace. Within two minutes, Jameson was called into action, tipping a Chris Smalley bullet header onto the crossbar from point blank range.

County were seeing a lot of the ball down the flanks in the early stages, Dan Cowan and Ben McKenna having a lot of the play, but lacked the final product, the former’s cross on six minute evading everyone in the penalty area.

Spartans’ first show of intent in the attacking third came on eight minutes when Dan Maguire rifled a cross into the penalty area – David McTiernan unable to rise high enough to guide a header on target.

The game settled down after the thrilling start, Warburton’s thirty yard effort the only notable effort on goal – his strike sailing well over Jameson’s crossbar.

Spartans brought the game to life just after the quarter of an hour mark when Robbie Dale released Maguire with an exquisite through ball. The England ‘C’ striker strode through one on one with Ben Hinchcliffe, slotting the ball past the onrushing ‘keeper – only to see the ball rebound of the base of the right hand upright and back into play.

As the game progressed, Spartans continued to grow into the game and forced a corner on 28 minutes – Hopson’s run and shot was deflected wide by Steve O’Halloran. The resulting corner from the right was clipped in by the former Whitby Town midfielder onto the head of Buddle who powered is effort just over.

As the clock ticked past the half hour mark, the hosts took the lead. With Buddle lying injured in the penalty area – McKenna floated a cross in from the right over Spartans defence onto the head of Jason Oswell who headed back across goal via the hand of Reid.

Warburton stepped up, sending Jameson the wrong way with a low penalty – nestling the ball into the bottom right hand corner.

Blyth – to their credit – responded in emphatic fashion. Dale played another delightful through ball for Reid to latch onto. He had acres of space to turn in the area and find Hopson who feigned to shoot before rolling the ball from the right towards Wrightson who struck a half volley into the bottom left hand corner.

Five minutes later Spartans had a penalty shout of their own turned down by referee David Underwood, Maguire’s attempted through ball appearing to strike the arm of O’Halleron – the referee waving play on.

Rivers was introduced at half time as Spartans were forced to bring off top goal scorer Dan Maguire with a twinge in his hamstring.

The hosts pressed on early in the second period, creating a number of early opportunities. County thought they’d taken the lead five minutes in, Cowan slid a ball across the area, Gary Stopforth getting a foot on the cross before Oswell tapped home only to see the offside flag of up – the touch by Stopforth the deciding factor.

Two minutes later Scott Duxbury found some space down the left flank for Stockport, jinking into the area before hitting a low effort straight at Jameson who made a comfortable save.

Spartans – much like in the first half – grew into proceedings as time wore on and had a guilt-edged chance to take the lead on the hour mark. Wrightson – now playing as a lone striker – closed down a Hinchcliffe goal kick, the clearance finding Rivers who was forced wide. He dropped the ball off to Hopson who tried to cutely chip the ball over Hinchcliffe, the ball falling just over the bar.

Spartans received a let-off three minutes later when a right wing corner for the hosts evaded everyone in the six yard box, including the clinical Oswell at the back post who fluffed his lines.

Two minutes later Rivers picked up possession in the centre of the pitch, picking out the run of Reid who was about to strike on goal – a beautiful sliding challenge from Cowen denying the midfielder an effort on goal.

With Blyth now in the ascendency, Stockport were throwing bodies at everything in their own penalty area. Hopson thought he’d scored in the 66th minute, striking an effort toward the bottom right hand corner from 12 yards out – O’Halleron on the line to keep the score level.

Four minutes later, substitute Adam Thomas produced a moment of brilliance. His Messi-esque run from the halfway line saw him evade the challenges of four Blyth players before striking a right footed effort from just inside the area, Jameson palming the effort away.

Two minutes later, Spartans almost produced their own moment of magic. Hopson – finding space on the edge of the area – beat Hinchcliffe with a low right footed effort, only to see the ball bounce of the base of the upright for a second time.

With 13 minutes left in regulation, Hopson showed his fantastic range of passing with a 60 yard cross field ball to pick out the run of Wrightson who’d peeled away from the centre-backs – his right footed half volley sailing just wide of the target.

As the clocked ticked past the 90 minute mark, tensions began to grow as both sides looked to protect a precious point. Three minutes into the four that were to be added in stoppage, the ball fell to Liddle on the left edge of the penalty area. He sent two defenders the wrong way as he chopped onto his right foot before sliding the ball past Hinchcliffe into the bottom left hand corner – to the joy of the 150 strong Green & White Army.

Spartans weren’t done, as from the re-start Hopson won possession and advanced towards goal. He struck a right footed effort towards the bottom right hand corner, Hinchcliffe only able to palm the ball into the path of Rivers who completed the scoring to secure a famous win for Alum Armstrong’s side against his former club.