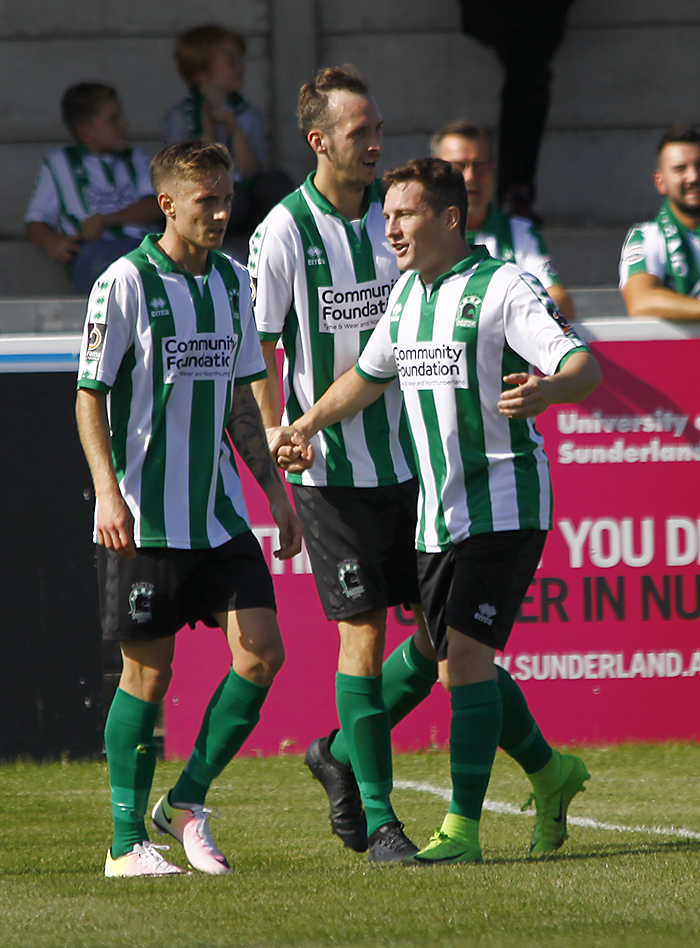 Blyth Spartans are through to the Emirates FA Cup Third Qualifying Round thanks to an 81st minute goal from Dan Maguire to overcome Evo-Stik side Nantwich Town in a replay.

In the 81st minute, Dan Maguire scored the only goal of the match when he got on the end of a cross from Jamie Holmes and tap the ball into the goal at the near post.

Nantwich Town started off strong against the hosts when in the 5th minute, Barnes delivered a ball into the box that Cooke couldn’t make the most of as he headed over.

Wrightson looked dangerous and managed to get Spartans into the game as in the 12th minute, he charged down the right wing then cut in to have a strike at goal which was a blocked by a defender.

Moments later, Wrightson then whipped in an inviting cross from the right for Reid but a Nantwich defender managed to get in ahead of him.

spectacularly cleared off the line.

Nantwich came back into the game in the 18th minute when Knight played in Barnes who took his shot first time and it slammed against the far right post.

Clear chances were few and far between for both sides but in the 41st minute, Fewster managed to get himself out onto the wing and found Holmes outside the box who hit it first time and sent it over the bar.

Towards the end of the first half, Holmes went on another great run and found himself some space outside the box, he then decided to take a strike at goal but it went over the bar.

Fewster found himself in a great position in added time as he was one on one with the keeper but his shot was straight at the keeper.

Nantwich got off to a good start in the second half as Barnes whipped in a cross that troubled Jameson who got a touch make sure that it didn’t go in.

In the 64th minute, Dale troubled Nantwich when he whipped in a free kick that Buddle got on the end of but sent it over the bar.

Saunders got a chance to put Nantwich in the lead but they would’ve been some help from Blyth as his shot was deflected off Nicholson but Jameson managed to save it.

Glover, who was a second half substitute for Nantwich, had a great opportunity when he found himself out to the right of the goal and had a strike at goal that hammered against the far left post.

Blyth took the lead in the 81st minute when Maguire managed to get in at the near post to tap home a cross from Holmes  – after a stunning turn on halfway from Reid opened up the counter attack.

Blyth looked for a second as Dale sent a through ball towards Maguire who had a shot that hit against the side netting.

Maguire’s goal was all that was needed in the end and Blyth are now into the 3rd round qualifying where they will have an away trip against Gainsborough Trinity.

Blyth will hope to carry this form into the league when they face AFC Telford at home this Saturday.

Man of the Match – Adam Wrightson