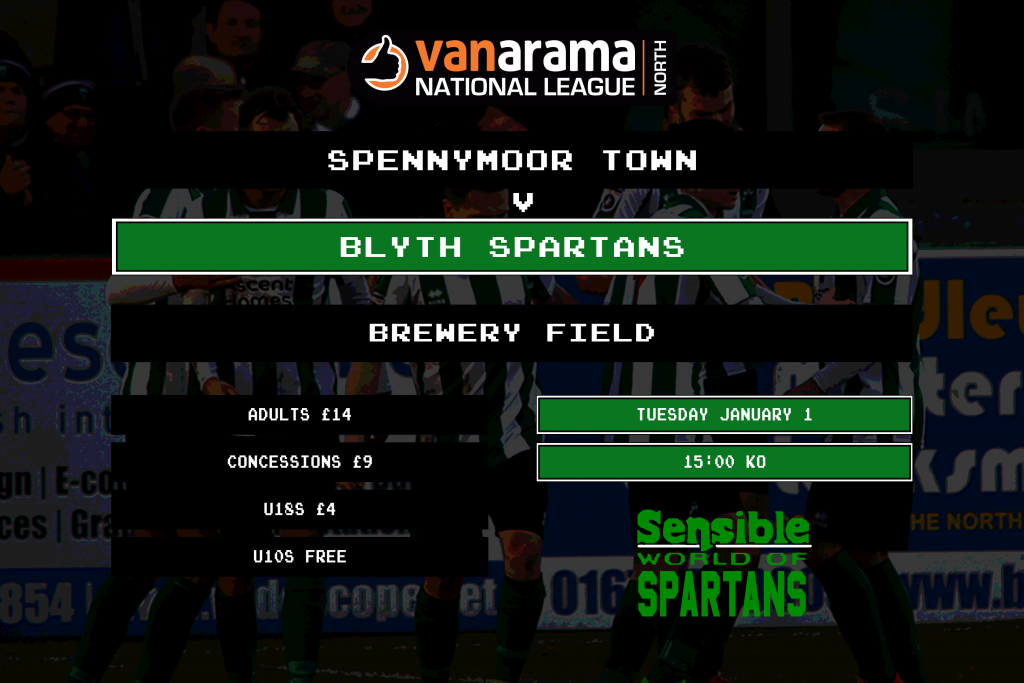 Alun Armstrong’s side return travel to Brewery Field to face high flying Spennymoor Town just six days after drawing 2-2 at Croft Park. Spartans are currently on a run of ten games undefeated, with eight wins and two draws during the time period

Spartans sit outside the play-offs on goal difference, with a win today potentially taking them as high as third in the Vanarama National League North.

A familiar foe, Spennymoor Town are flying in 2018/19 having – like Spartans – missed out on a play-off berth on the final day of the season last campaign. The free-scoring Moors are currently fourth in the Vanarama National League North – one point ahead of Spartans with two games in hand, having won 10, drawn seven and lost just four games in the league this season.

Forming in 2005 after the collapse of Spennymoor United and Evenwood Town, the Moors have had a meteoric rise in their 13-year existence, winning four Northern League titles and an FA Vase title.

Blyth Spartans have met either Spennymoor United, Evenwood Town or Spennymoor Town on 216 occasions, Blyth victorious in 102 of those, our visitors 52 times and 39 draws. Unfortunately for Spartans, all those wins game against the previous clubs associated with today’s opposition.

Against Spennymoor Town our record is less than glorious, meeting six times, Spartans are yet to record a victory against our nearest neighbours in the National League North. Blyth have lost four and drawn twice against the Moors, a late 3-1 defeat last New Years’ Day the latest meeting of the two sides at Brewery Field.

Jason Ainsley was appointed manager in the summer of 2007 and has now managed the club in over 600 games, winning four promotions, five league titles, two domestic cups and the FA Vase in 2013.  The 47-year-old is a former player, captain and assistant manager of Spennymoor in various spells from 1989.  He also played at Hartlepool United, Barrow, Blyth Spartans and Gateshead before having spells in Singapore and Australia as a player. The 2018/19 signals Ainsley’s 12th season in charge of the club making him one of the longest serving managers in the country.

Taylor is a big, strong and technically adept goal scorer who is a former FA Vase winner with Whitley Bay, He scored more than 100 goals for Ashington and grabbed plenty of headlines during the 2016/17 season. He scored 19 goals to finish top of the pile for Moors and secure his place in the Jamie Vardy Academy over the summer. Upon returning to the club after the summer break, Taylor took his form to the next level, scoring four times in his first five games in the National League North. He went on to find the net over 20 times and caught the attention of clubs across the league and beyond. Taylor won a number of accolades at the club’s end of season awards, winning ‘Player of the Year’, ‘Player’s Player of the Year’ and ‘Top Goalscorer’.