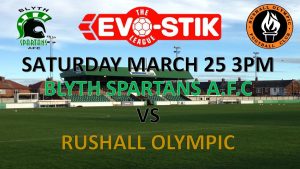 Blyth face Rushall Olympic for the first time this season. The last that Rushall visited the Northumberland they left empty-handed as Blyth romped to a 3-0 victory.

Blyth Spartans grabbed a deserved point on Tuesday evening as they drew 2-2 with their closest challengers Nantwich Town. Luke Armstrong grabbed a brace to take his personal goal tally to 18 league goals but still lagging behind Daniel Maguire on 25.

Rushall Olympic meanwhile suffered a home reverse to Coalville Town as they lost 5-2. Gurjit Singh opened the scoring before the visitors hit back with 5 unanswered goals, Aaron Forde’s goal was merely a consolation.

Blyth enter their final 7 games knowing that 15 points will guarantee the title and promotion.

John Allen – Possibly the most unique manager in the league in that he is also the clubs chairman. In charge since May 2016, it is not his first spell in the hot seat.

George Bowerman – A striker with great finishing ability who despite being 25 has plenty of experience around the leagues. He came through the youth ranks with Walsall before joining Rushall from Halesowen Town.