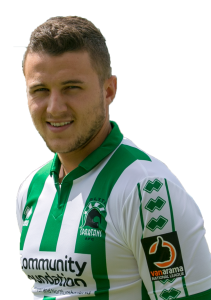 Defender Nathan Buddle expressed his delight as Spartans stunned Stockport County to keep their play-off dream very much alive, but insists they’ll need maximum points from their next three games to have a chance of the play-offs.

Dan Maguire scored the only goal of the game as Spartans secured a memorable 1-0 win away at Edgeley Park to stay in eighth place, just three points from the play offs.

“That’s massively up there,” said Buddle. “It’s always a tough place to come, such a big crowd and one of the best grounds in the league by a country mile.”

And he was full of praise for his fellow defenders who restricted Stockport to few chances – the same Stockport side that hammered Chester 6-0 in midweek. “We had to work hard at the back which was inevitable, but we took our chance brilliantly with Nipper (Dan Maguire) and then the back four and two in front just defended brilliantly all game and we came away with a well deserved three points.”

The result sees Spartans extend their unbeaten run to seven games, including four successive wins, and they’re now within touching distance of Telford United in the last play off place with three league games left

Buddle said Spartans would be looking at these games as “three cup finals” and that with three wins, and a bit of luck, they should be able to nick the last play off spot. “We’re going for maximum points, if we can do that we’ll give ourselves a great chance. We’ll just see how it goes and take it game by game and if we play like we did today there’s no reason why we can’t do it.”

Spartans play-off push begins on Good Friday as they host Guiseley, before an away trip to FC United of Manchester on Easter Monday, and then the league season draws to a close the following Saturday as Southport are entertained at Croft Park.