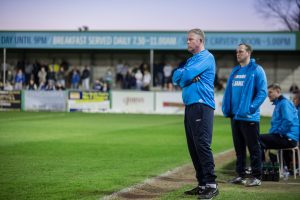 Alun Armstrong wants to reassure Blyth Spartans supporters, and has pleaded for fans to get behind their team ahead of the new National League North campaign.

Blyth begin their competitive season away to Hereford on Saturday with summer signings: Alex Nicholson, Jamie Holmes, Kieran Green and Bradley Fewster all expected to make their debuts.

However, with Ryan Hutchinson set for a lengthy spell on the sidelines, the lack of depth in the centre-half area has been highlighted – and Armstrong hopes to bring some positive news before the weekend.

Armstrong insists he is working hard, and will continue to do so this season, and has asked fans to back him and his players following what has been a difficult start to the new season.

“All I will say to the Blyth fans is that I am working hard,” Armstrong said.

“I’m trying to get people in to boost the squad. They [the fans] just have to help us as much as they can by getting behind the lads.

“We’re still looking for a few players ourselves – I think everyone knows that. I’ve been battling out for three months now trying to get a centre-half in.

“We’ll do ok this season. I will say to the fans: don’t get too worried about it. We are working hard and I will not stop working hard but they’ve got to help us by getting behind us.”

Spartans were without key players Sean Reid and Holmes in the defeat to Gateshead on Saturday, and Armstrong is now looking forward to being able to work with his full squad – rather than having to deal with players missing for various reasons.

‘Frustration’ is the keyword for Armstrong: “I’ve said before I’m not a big fan of pre-season games.

“[Sean] Reidy and [Jamie] Holmesy were both away – two massive players for me. That’s the thing in pre-season, I’ve never had the full squad yet.

“Reidy was a big miss because of the way we play and Holmesy – he’s come in and been different class but he had a holiday booked because he thought he was still going to be at South Shields because they start two weeks later.

“That’s what I get frustrated about in pre-season for part-time clubs, you never get to work with what is going to be your full team in pre-season.

“That’s the frustrating thing but it’s about getting minutes for the lads and getting them as fresh as they can be.

“It’s just frustrating how you can’t get everyone together. We haven’t got a bad squad when everyone is here. I know we’re short but it’s something I’m working on.”