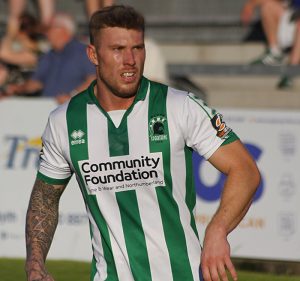 A brace from Michael Sweet helped Blyth Spartans to a 2-1 victory in their penultimate friendly of pre-season.

Whitley Bay pulled one back in the second half when Nathan Stephenson’s free-kick was met by the head of Callum Anderson in the 62nd minute.

Blyth got off to a shaky start when Trialist gave the ball away just outside his own box. Bradley Hird got the ball and had a strike at goal, but it curled over.

Spartans got their first goal of the night when Dale got the ball onto his right foot and curled a ball in that was met at the far post by Sweet, who tapped it past Lister.

Whitley Bay got a chance to equalise when Stephenson was played through on goal but his shot across goal was straight at Mark Foden.

Another opportunity for an equaliser came when Lewis Orrell whipped in a ball for Stephen Ramsey, whose header  went over the bar.

Blyth got a second just before half time when Pearson headed Rhys Evans’ cross back across goal, allowing Sweet to head past Dan Lister with ease.

At the start of the second half, Sweet had a chance to get a hat-trick when he got his head on the end of a cross by Craig Spooner, but his header went over the bar.

Spooner continued to cause Whitley Bay problems as he sent in a cross that narrowly missed Adam Wrightson who came sliding in at the back post.

Whitley Bay pulled one back in the 62nd minute when Stephenson whipped in a free kick which was met by the head of Anderson and past the Trialist keeper into the Spartans net.

In the 85th minute, Ursene Mouanda crossed it into Sweet, who laid the ball off for Wrightson, but the winger shot went well wide.

Whitley Bay nearly equalised in the 90th minute as Kieran Brannen’s free kick looked to be curling in the top corner but instead rattled the post and bounced out of play.

Lee Clark’s men host Aberdeen XI in their final game of pre-season on Sunday in  the Texo Challenge Trophy.