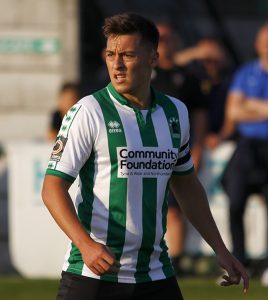 Scott Fenwick scored a brace as Blyth Spartans earned their seventh win of pre-season following a 3-0 win over Ashington.

The striker handed the visitors the lead from the penalty spot on the stroke of half-time when Dale Pearson was brought down by goalkeeper Dan Staples.

Blyth soon doubled their advantage after the interval when a whipped cross from A Trialist found Pearson in space, who laced it home from close-range.

Fenwick then popped up with second in the closing stages when he slotted the ball into an empty net after a pass from the B Trialist caused trouble in the box.

Playing their fourth game in seven days, Spartans went closest to opening the scoring when captain Robbie Dale, back from injury, rattled the crossbar with a follow-up header from Fenwick cleared off the line.

Hutchinson, beginning the game at right-back before switching to a recognised central role after Tom Devitt was forced off, picked up the ball in the box but his shot went wide of the far post.

A lapse in concentration in the Blyth defence give Johnston a clear opportunity to put the Northern League Division One side in front, but he struck the side netting, fooling some of the crowd into thinking it was a goal.

Ashington then had another chance in the 31st minute when Dominic Price had a shot at goal from outside the box, however, it floated over the crossbar.

A defence-splitting pass from Jake Orrell then sent Pearson clear of the hosts’ defence as his attempts to round the goalkeeper saw referee Mick McDonough award a penalty, which Fenwick confidently dispatched.

In the 53rd-minute, Spartans got their second of the afternoon thanks to an excellent cross from A Trialist that was put on a plate for Pearson for 2-0.

The pace of Adam Wrightson caused all sorts of problems for Ashington. He expertly took Orrell’s long punt in his stride before finding substitute Michael Sweet, also back from injury, who aimed straight at Staples.

Blyth fans also had a sneak peek of what is to come from front two Fenwick and Sweet, with the duo combining, only for the latter to power his shot inches away from the bottom left corner.

Among the late Spartans surge, Ashington came close to pulling one back when Callum Johnston directed a free-kick narrowly wide of Mark Foden’s post.

Fenwick thought his chance of a brace had gone when he struck Staples’ poor clearance wide, however, he was not to pass the opportunity a second time when he slotted home from an almost identical position.

Next up for Blyth is a home tie with Whitley Bay on Wednesday. Kick-off is 7:30pm.