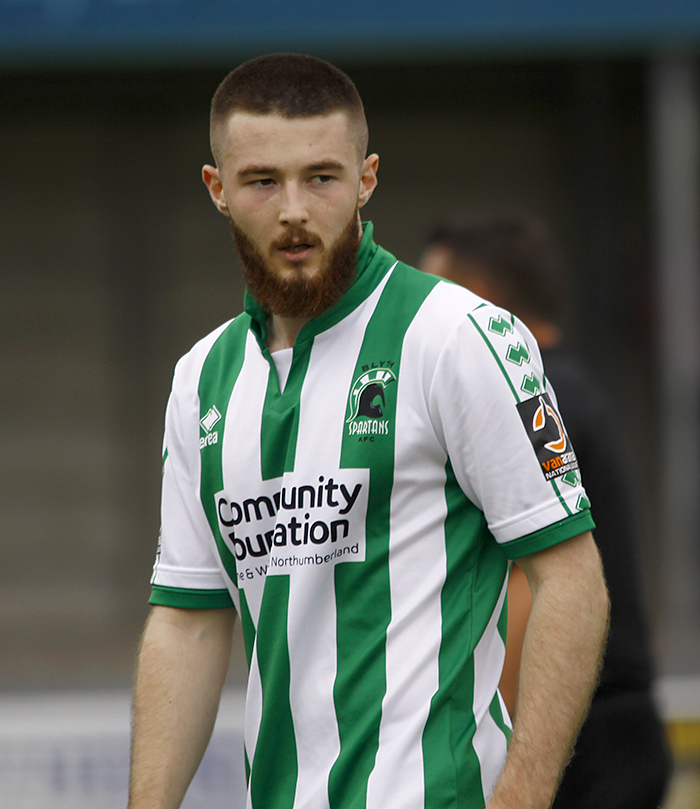 Blyth Spartans earned a place in the hat for the Emirates FA Cup third qualifying round after coming from behind twice to draw 3-3 with Evo-Stik side Nantwich Town.

James Lawrie gave the hosts an early lead before the returning Jamie Holmes equalised on the brink of half-time.

The Dabbers re-took the lead with 57 minutes on the clock thanks to a wonderstrike by Casper Hughes, however Sean Reid responded from a Spartans corner within 60 second.

Bradley Fewster then gave Spartans the lead with his first goal for the club before Michael Liddle was given his marching orders for a second yellow card.

A second from Lawrie – with three minutes to go in normal time – means we have to do it all again on Tuesday night at Croft Park.

Armstrong made three changes from the side that lost 2-0 to Leamington at Croft Park last weekend – Nathan Buddle, Jamie Holmes and Damen Mullen returning to the starting XI in place of Aaron Cunningham, Dan Maguire and Lewis Horner.

The visitors were not helped by a late arrival at the ground, and started sluggishly once again, the hosts creating an array of chances squandered by Knight and Saunders – but the latter turned provider for the opener.

His left wing cross was duly converted at close range by Lawrie as the Dabbers took a well deserved lead.

Saunders was proving to be a thorn in Spartans side, and only a fine stop by Peter Jameson denied him a goal and Nantwich a second.

Blyth were now getting into their stride, and just after the half hour mark Robbie Dale went close. Causing mayhem down the left flank he cut onto his right foot before hitting an effort into the side netting.

A minute before the interval, Blyth got a route back into the game thanks to summer signing Holmes. The former South Shields man ran Bourne ragged before slotting the ball under the legs of Spiess in the Nantwich goal.

There was still time for Glover to loop a header onto the crossbar for the hosts before the referee blew the half-time whistle.

The second half saw an early change from the Spartans bench as Adam Wrightson replaced Jarrett Rivers – but it was Nantwich Town who started the half on top and re-took the lead on the hour mark.

After Spartans headed away a Dabbers set piece, the ball fell perfectly for Hughes who rocketed a right footed effort from 30-yards rifling into the top left hand corner – above the despairing dive of Jameson – a stunning finish.

The hosts joy was short lived as Reid equalised once again from a corner as he slammed the ball past Spiess.

And within seven minutes Spartans had the lead thanks to some wonderful work by Wrightson. He left Cotterill for dead on the right before crossing low into the penalty area – Fewster on hand to score his first for the club.

Within five minutes Spartans were down to ten men when Liddle – who was already on a booking – brought down Saunders and was given his marching orders by the referee.

Despite the numerical disadvantage, the visitors almost added a fourth when Reid hit a dipping volley onto the Nantwich crossbar.

With three minutes to play – Nantwich pulled level. After Jameson denied Lawrie and Glover swiped an effort wide, the same two players combined for the former to equalise.

A thrilling cup tie between two well matched teams – and we get to do it all again at Croft Park on Tuesday Evening.