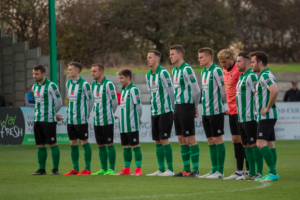 Tony Breeden’s 73rd-minute penalty save from Sean Reid denied Blyth Spartans a share of the spoils on their first-ever visit to the Phillips 66 Community Stadium.

Reid’s miss followed 22 minutes after Daniel Udoh fired what proved to be the winner following delightful footwork from Matt Dodd in the build up.

The narrow defeat meant Spartans’ three-game winning streak was ended, however, can still remain positive having finished the afternoon with a seven-point advantage in the race for the play-offs.

Alun Armstrong made two changes from the Spartans side that beat Bradford Park Avenue last weekend. Joe Gorman and Macaulay Langstaff made their first starts since joining and rejoining, respectively, in place of the absent Nathan Buddle and Dale Hopson.

It was an exciting opening 20 minutes – with the hosts almost getting their noses in front after just five minutes.

The ever-threatening Kieran Dunbar nearly caught Peter Jameson off-guard with a driven 30-yard free-kick. Jameson awkwardly dived to his right-hand side to push the effort away from danger.

Spartans then shortly grew into the game, and perhaps should have taken the lead on 11 minutes through Kieran Green.

Jarrett Rivers’ corner wasn’t cleared accordingly – allowing Green to collect the ball from six yards out – only for the Gateshead loanee to clear the target.

The energetic start to the game from both sides continued with Dunbar trying his luck once more with a shot that rolled past Jameson’s left post.

Unfortunately, the promising start from both teams failed to maintain itself as the next opportunity didn’t arrive until the 36th minute.

That was when Rivers jiggled his way into the penalty area – though lacked the finishing touch with his attempt rising over the crossbar.

A few minutes later, Leamington had the Blyth defence stretched but Dodd’s poor first touch allowed Ryan Hutchinson to get across and block the winger’s shot.

Rivers – again picked the ball up in the area – fired a low shot from the left-hand side of the six-yard box but Breeden was equal to it.

Langstaff then oversaw Spartans’ best chance of the half as he created space for himself inside the D, only for the post to come to Breeden’s rescue.

Like the first-half, it began in a frantic fashion – opening up with Gorman’s brave block from Udoh’s thunderous goal-bound attempt.

The visitors responded with a very inviting chance of their own as Robbie Dale fed in the unmarked Reid but the midfielder disappointingly struck straight at Breeden.

And that would be the last time Spartans stayed level in the match due to an inspired bit of play from Dodd.

Dodd had overseen the majority of Leamington’s play in the first period, and it was his superb work on the wing that sniffed out the unmarked Udoh, who side-footed it home.

To Blyth’s credit, they instantly pushed for an equaliser when Dale’s long-distance free-kick seemed destined for the top corner but Breeden was impressively well positioned.

In the 72nd minute, Spartans’ quest to earn at least a point looked on as Ryan Hutchinson fell to ground in the penalty area, leaving the referee to point to the spot.

And without destinated penalty-taker Hopson, Reid took on the responsibility but was left unsuccessful as Breeden dived the right way to keep it out.

Dale tried to his best to drag Spartans back into it in the final 10 minutes – with the best of his two late chances requiring a superb strong hand from Breeden to tip in behind.

Spartans Man of the Match: