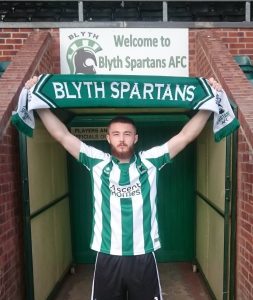 Sean Reid, Jamie Holmes and a brace from Bradley Fewster allowed Spartans to cruise to victory on an evening where the scoreline could have ended in double figures.

Armstrong’s men look to be shaping up nicely for the new season and now look forward to the challenge of Evo-Stik Premier side South Shields on Saturday.

From the off, Spartans bossed the central positions with the visitors struggling to deal the likes of Holmes, Fewster and Green.

For the opener, Holmes, destinated in a number 10 role, picked out the run of Ian Watson before the left-back delivered onto the diving head of Reid on 11 minutes.

Moments later, Holmes found himself in a similar position with the former South Shields man striking the underside of the crossbar as keeper Conor Grant was left routed to the middle of his goal.

To note, there were shots and glimpses of confidence from Jarrett Rivers and Green before Holmes doubled Blyth’s lead – finishing off a superb move.

Michael Liddle drove forward from centre-back – Fewster, in behind the Ashington back line unselfishly squared it to Holmes to make it 2-0.

Ashington’s only threat of the half presented itself from a Kyle Downey corner with Gerrard Richardson unmarked, yet unable to find the target.

The forward pairing of Fewster and Holmes looked particularly pleasing but Green reminded Spartans fan of his passing quality when Fewster was able to round the keeper, though was denied by a last-gasp Ryan Bell clearance.

Dan Maguire made his first appearance of pre-season – coming on as half-time substitute, and was immediately in the thick of the goalmouth action.

Holmes, who did brilliantly to hold off two challenges on the wing – sprayed the ball out wide to Adam Nicholson – Maguire met the right back’s cross but headed straight at Grant.

Holmes capped off his fine performance and again getting the better of the visitors’ defence – taking the ball past two players before slotting in Fewster, who powered his shot home via the crossbar.

The crowd then rose to welcome the return of Jordan Watson as the defender made his long-awaited return since injuring his knee against Curzon Ashton last year.

Spartans kept up their intent to increase the scoreline but as Holmes began to tire, the pace of the Spartans attack dropped a few levels with Adam Wrightson’s low strike in the closing stages providing the last noticeable chance.