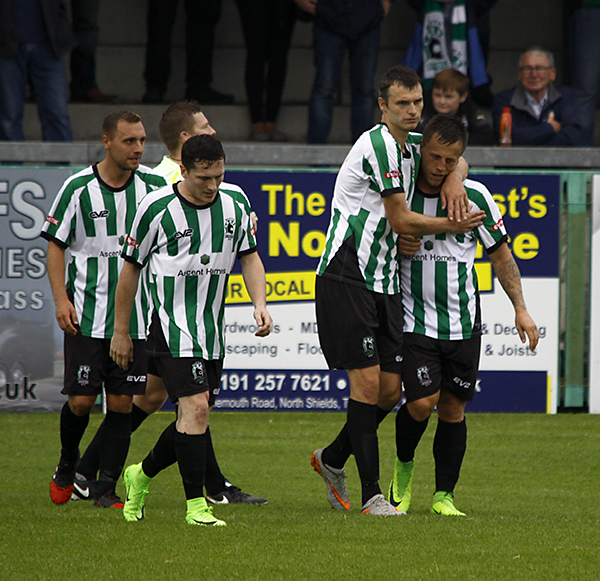 Blyth Spartans fought back from two goals down against Morpeth Town in this pre-season friendly, but succumbed to a late winner from former Spartan Ben Sayer.

Morpeth struck within 29 seconds through Sayer, before substitute Joe Walton doubled up on 36 minutes – after more poor defending from Blyth.

Jarrett Rivers turned home a poor back pass on 72 minutes to drag Blyth, before Jordan Laidler tapped in to restore parity ten minutes later. Sayer had the last word, however, with a long-range strike that went in off the upright to send the Morpeth fans home happy.

Spartans named a much-changed side to the team that beat Middlesbrough XI 4-2 on Saturday, with no less than five changes seeing the likes of Andrew Cartwright, Damen Mullen and Sean Reid given a start. Ian Watson also made his first start at Croft Park since making his return to the club earlier in the summer.

Mullen was on the winning side when Morpeth triumphed 4-2  in the FA Cup last season, but a mistake straight from kick off saw the midfielder help his former club to the perfect start.

A poor touch from the midfielder saw Liam Henderson dispossess him, before Mullen’s challenge saw the ball end up in Sayer’s path. The former Spartan kept his composure to finish well past the trialist goalkeeper one-on-one.

The home side had to wait until the eighth minute for their first chance of the game, but they were unable to make more of it – as no one was able to get on the end of Dale Hopson’s teasing free kick across goal.

With 11 minutes gone, the Croft Park faithful were incensed when Daniel Maguire was felled in the area by ex-team mate Richard Pell in an off-the-ball incident. However, referee Scott Duncan ignored the very vocal penalty shouts from around the ground.

Hopson cut inside a minute later and forced Karl Dryden to palm his shot back into danger, but Maguire’s rebound was blocked away.

Maguire found himself in again on 13 minutes, but he could only drag his shot wide across goal. Hopson tried once more soon after, but his curled attempt from the edge of the area produced a comfortable stop for Dryden.

A lively Hopson was causing chaos for the Northern League side and his 25th minute free kick was met by the head of Nathan Buddle, but the ball flashed across goal.

Wayne Phillips was enjoying a spirited return to Croft Park and his good work down the left on the half-hour really should have doubled Town’s lead. The ex-Blyth winger picked out Joe Walton, but he ballooned his header over the bar from a couple of yards out.

The substitute wasn’t to be denied, however, and he made amends for that miss just six minutes later. A goalmouth scramble after a poor clearance from Andrew Cartwright saw the ball end up with Walton, who fired home a fierce strike from close range to give Morpeth a 2-0 lead at the break.

Morpeth weren’t about to sit back on their laurels and had an opportunity to further extend their lead straight from the restart, but Sean Taylor couldn’t keep his effort on target.

Blyth’s trialist right winger twice got into good areas looking to impress, but saw both of his crosses blocked away by a resolute Morpeth defence.

That would be his last action of the game, due to making way for Jarrett Rivers on 57 minutes – as part of a triple change by Blyth boss Alun Armstrong. The other two changes saw Ryan Hutchinson replace Buddle, while Jordan Watson came on for Cartwright.

Those changes seemed to spur Spartans into action, with three good chances in as many minutes just after the hour mark.

First, the club’s trialist central midfielder picked the ball up on the edge of area on 62 minutes, but placed his first-time attempt wide.

Hopson then curled a free-kick around the wall a minute later, but Dryden was able to get fingertips to it and divert the ball onto the post. From the resulting corner, J Watson then struck the other upright from a tight angle.

Another trio of substitutions followed on 69 minutes, which invigorated Blyth further still – as they halved their deficit just three minutes later.

Just as Morpeth’s first goal had been a gift, the hosts profited from a generous defence – as Rivers reacted quickest to an awful back pass in the box to nip in and nutmeg a stranded Dryden from two yards.

Rivers looked to turn provider with 11 minutes to go, as he floated a lovely ball in towards the back post. Reid dived in to meet it, but could only get under the ball and hit it wide.

The pair then combined again on 81 minutes, but Reid’s header was straight at Dryden.

It was a different story 60 seconds later though – as Rivers played a defence-splitting pass through the middle to Reid, who slid into a 50/50 on the penalty spot with an advancing Dryden. The lofty Spartan got enough of a touch on it to play in Laidler, who beat his marker to tap in to an empty net.

The home side looked to have battled back to claim a draw, but ex-Blyth midfielder Sayers produced a moment of magic on 85 minutes. Opting to strike from distance, the star of last season’s FA Cup meeting unleashed an unstoppable effort that left Spartans’ trialist goalkeeper helpless – as the ball went in off the upright to consign Armstrong’s side to defeat.