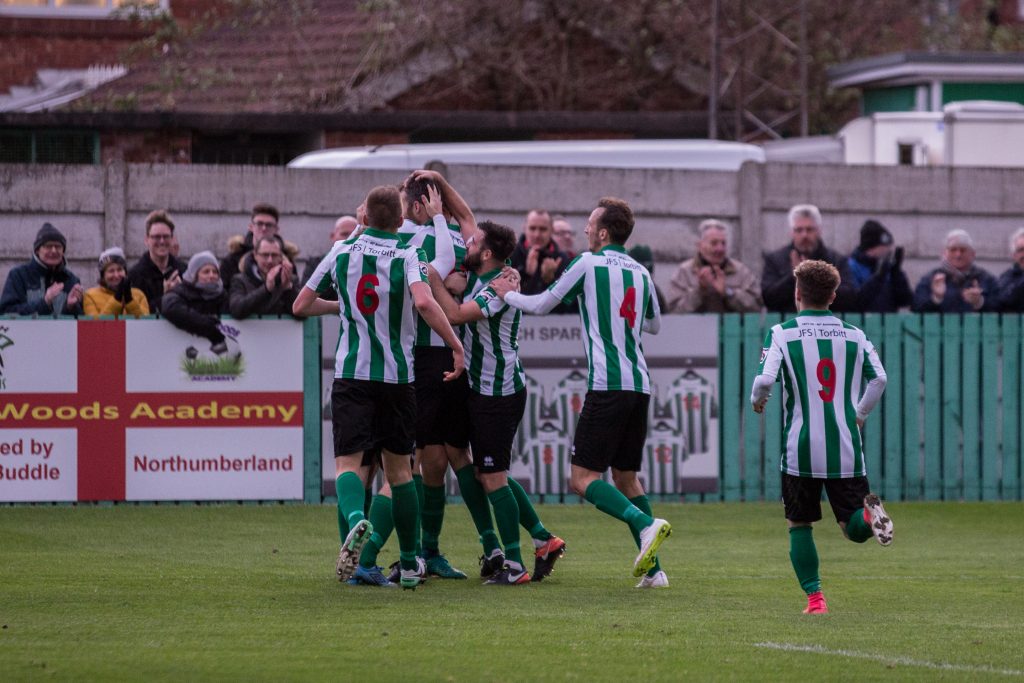 A wonder strike from defender Ian Watson secured Blyth Spartans’ safe passage through Saturday’s Buildbase FA Trophy tie against Stalybridge Celtic – as they came from behind to win 2-1, after a flurry of late drama.

The visitors caught Spartans out in the 69th minute by opening the scoring, when Connor Hughes broke forward and made the most of a lucky break in the box to slot into an empty net. Substitute Sean Reid then headed home from a corner for the hosts ten minutes later, to put Blyth back on terms with their lower league opponents.

However, Watson decided the tie on 84 minutes – as he unleashed a world-class strike from 25 yards that found the top corner of the net, which sent Croft Park into delirium and Spartans into the next round of the competition.

With Blyth sat in fourth place in the Vanarama National League North, Alun Armstrong made the decision to rest a number of players for the visit of Stalybridge in the Buildbase FA Trophy. Only Ryan Hutchinson, Jarrett Rivers, Adam Wrightson and captain Robert Dale kept their places  in the starting lineup from last weekend’s 3-0 win at Southport.

The two sides switched places in the English pyramid last season, but it was the Evo-Stik Premier League side that threatened first on six minutes.

Hutchinson was too casual in trying to clear the ball and Liam Dickinson dispossessed him. The centre-forward crossed the ball over looking for strike partner Matthew Wolfenden, but debutant defender Daniel Burns was able to clear.

Blyth’s first real chance came three minutes later, when Rivers drilled in a free kick from the right wing. He picked out the run of Greg Rutherford, but his header went flying over the bar.

The ex-Berwick Rangers striker was nearly put in again six minutes later, following a fast flowing move involving Dale, Wrightson and Keiran Green. The on-loan Gateshead midfielder played a teasing ball into the area, but Rutherford was beaten to the ball by Alex Honeyball.

Celtic certainly weren’t at Croft Park to make up the numbers and could quite easily have gone ahead just after the 15-minute mark. Hughes found Jake Charles left of goal, but Shaun MacDonald spread himself well to divert the ball behind for a corner.

Less than 60 seconds later, Blyth had the ball back up the other end and nearly scored themselves. Rutherford created an opening for David McTiernan with a great run down the left and the former Whitby Town midfielder struck a fierce shot from the edge of the box, but it fizzed just over Joe Slinn’s goal.

Rutherford raced at goal once more in the 20th minute and tried his luck from 20 yards out. The striker could easily have taken the ball further in before having a shot, but he still managed to force Slinn into a fantastic one-handed save down to his right.

Wrightson’s cross/shot then called the Stalybridge keeper into action six minutes later. Slinn saved well with his feet, but there were no green and white shirts following in for the rebound.

Just prior to the half-hour mark, Spartans tried to claim for a penalty – as Dale’s cross from the left struck the hand of Oliver Crowley inside the box. There were very vocal shouts for handball, but referee Craig Dean was unmoved in the middle.

The Celtic bench were up in arms themselves on 34 minutes, when Rivers and Dickinson went shoulder-to-shoulder in the Blyth area. The whole of the away dugout were up on their feet shouting for a penalty, but Dean was not fooled by the theatrics of the stocky Stalybridge striker.

Just two minutes later, they had their heads in their hands again – after the visitors went agonisingly close to an opener. Hughes dispatched a shot from 30 yards out that evaded MacDonald at full stretch and struck the base of the post, but any attempt at a follow-up was thwarted by the offside flag.

Both sides came out for the second half still locked at 0-0, but it was Blyth that looked more likely to create something in the early spells after the break.

Watson ventured high up the pitch on 49 minutes and tried one from distance, but the left-back’s scuffed speculative best went well wide of goal.

A lovely through ball from Green split the defence and released Dale through the middle three minutes later. The Spartans captain beared down on goal on his own, but a debatable offside flag stopped him in his tracks.

Dale had the ball at his feet again soon after and was able to get a shot away from 18 yards. However, a block by Luke Ashworth stopped the talismanic winger’s shot from testing Slinn.

Just after the hour mark, Rivers’ corner was headed clear only as far as McTiernan 18 yards from goal. The midfielder’s shot evaded everyone in the box, but it went wide of the upright.

McTiernan then made way for Reid seconds later, in a double change that also saw Dale Hopson take the place of Wrightson.

Both introductions then had chances to open the scoring within two minutes of coming on. Hopson drilled a free kick straight at Slinn on 63 minutes, before Reid drilled one wide across the scrambling Stalybridge stopper moments later.

Dale then cut inside from the left, but fired wide from a tight angle – as Spartans continued to assert their dominance in the first 20 minutes of the second half.

However, Reid’s tackle on halfway ran loose with 21 minutes remaining and Celtic capitalised perfectly – as they rode their luck to take the lead.

Hughes picked the ball up and ran well at goal, evading the challenge of Andrew Cartwright. Burns appeared to win the ball, but his touch took the advancing MacDonald out of contention and Hughes was able to side-foot home into an empty net.

Spartans absorbed that sucker punch and continued to press forward, looking to get themselves back into the tie. Their efforts were suitably rewarded on 79 minutes, when Blyth pulled level.

Rivers stung the hands of Slinn, before the ball made its way to Green and the loanee saw his shot blocked behind. From the resulting corner, Reid nipped in at the front post – ahead of teammate Burns – and flicked a header across goal and into the back of the net.

Reid then looked to double his tally just two minutes later, when he shot low at Slinn from outside the area.

While that was a routine save for the Celtic stopper, he could do nothing with Spartans’ second – which came from an unlikely source – on 84 minutes.

Dale played the ball into the path of Watson from the left, in a repeat of a Blyth attack earlier in the second half. This time though, the left-back drove a unbelievable 25-yard effort into the top corner that Slinn was powerless to get anywhere near and gain Spartans a place in the next round of this season’s Buildbase FA Trophy.

Armstrong’s side will have been relieved to avoid a replay at Stalybridge, meaning they have a full week to prepare for the visit of Vanarama National League North leaders Salford City next Saturday (3pm kick off.)