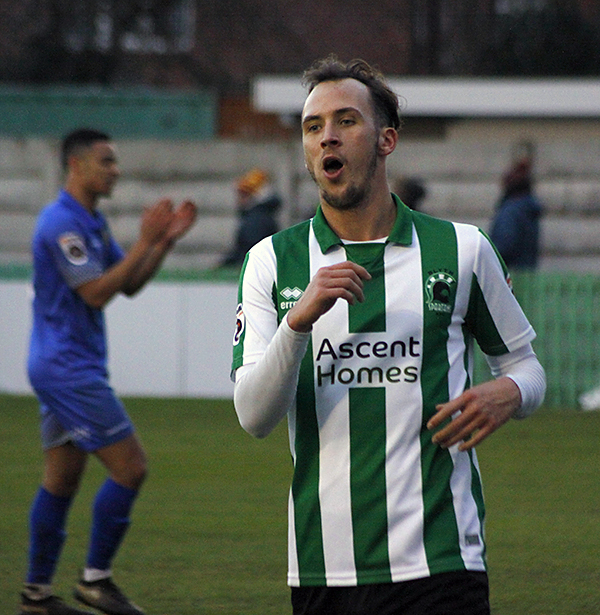 It has taken until the 30th game of the season for Blyth Spartans to pick up their first draw of the 2017/18 season, but the men from Croft Park will be disappointed to come away with just a point in a 1-1 draw with F.C. United of Manchester.

Sean Reid had given Spartans a second half lead after latching onto a fantastic diagonal ball from Robert Dale – finishing with aplomb through the legs of Lloyd Allinson.

However, a 70th minute equaliser from player-manager Tom Greaves stole a point for the travelling Red Rebels – tapping home after Craig Lindfield had cannoned a stunning strike of the crossbar, onto the post, and into the path of Greaves.

It was a match of few chances – especially in the first 45 minutes. An 8th minute through ball from Hopson found Rutherford as he strode towards goal. He appeared to be hauled down by Matty Hughes, but the referee waved away the cries for a penalty from the Spartans faithful in the Lennon Properties End of the ground.

A minute later, Allinson made a point blank save from an unlikely source – Ryan Hutchinson, who’d latched on to yet another exquisite through ball from Dale – but the offside flag was up against the Spartans centre-half.

It was a period of half chances for Spartans, who controlled possession for long periods, but couldn’t turn that control into clear-cut opportunities. This was evident in the 13th minute when Hopson, about to strike on goal, was denied by one of the Red Rebels back five with a sumptuous sliding challenge.

Just after the quarter mark, Lindfield should have netted the opener for FC United. With Spartans back-tracking towards their own goal, Michael Liddle made what seemed a vital challenge to take the ball off Kieran Glynn – but the tackle played in three FC United players who would have been offside had it been their player to play the pass.

The assistant’s flag was raised but the referee rightly played on – Glynn crossing low for Lindfield – six yards from goal – to squander a right footed effort with just Jameson to beat – the ball trickling past the left hand upright.

Spartans were soon back in the ascendency, Rutherford making another defence splitting run – this time onto a Reid through ball. The former Berwick Rangers striker beat a sliding defender with a left foot chop onto his favoured right, but a second defender – Zac Corbett – slid the ball away with the goal gaping.

On the half hour mark, Hopson went close for the home side, Dale with a floated cross field ball onto the foot of Hopson who took a touch before slicing an effort just wide of the target – inside the right-hand side of the penalty area.

There was very little action in the final fifteen minutes of the first half, with no goalmouth action to speak of, but Spartans should have taken the lead in the second minute of the second half.

Hopson’s right-wing corner was met by Reid eight yards from goal, the midfielder making the cleanest of connections with his head on the set-piece but inexplicably missing the target completely.

In the 53rd minute, man-of-the-match Jarrett Rivers found space down the right hand side, reaching the byline before nutmegging a defender and hitting an effort on goal, Allinson saving low to his left to deny the winger.

Three minutes later the deadlock was broken. Dale received the ball on halfway on the left flank before unleashing one of his trademark diagonal balls towards the penalty area. Sean Reid – who was now playing in a more advanced position – was playing off Corbett’s shoulder, beating him to the ball and sliding his finish through the legs of Allinson and into the back of the net.

The lead was almost doubled eight minutes after the opener when Dale went on a mazy run down the left-wing before – somehow – he took the ball past two in the penalty area, fizzing a cross through the six-yard box – no Spartan on hand to tap into an empty net.

A crowd of 985 – then saw the return of striker Dan Maguire as he replaced Rutherford midway through the second period. He almost made an instant impact as he played in David Atkinson down the right – the latter’s cross evading everyone in the penalty area.

An almighty sucker-punch hit Spartans in the 69th minute. Damen Mullen was dispossessed deep in his own territory under a heavy challenge – the referee – as he had for the majority of the afternoon – allowed play to go on with Lindfield breaking into the penalty area.

Lindfield hit a thunderous right footed effort off the crossbar, onto the post and back into the six-yard box where player-manager Greaves guided the ball into the top right-hand corner to the joy of the visiting crowd behind the goal.

With three minutes remaining, Rivers could have handed Spartans all three points. After another bit of skill from Dale down the left, the winger picked out Rivers out with a cut back pass – the former Blackpool man unable to strike first time, taking a couple of touches before the Red Rebels defence got back in number and snuffed out the danger.

As the clocked ticked past 90 minutes, Blyth had a last gasp chance to seal victory. Hopson’s cross from the right was met by Buddle – whose looped header from the back post seemed to take ages to drop as it fell agonizingly wide of the right hand upright.

Two points dropped for Alun Armstrong’s side who will now host Alfreton Town at Croft Park on Tuesday Evening.