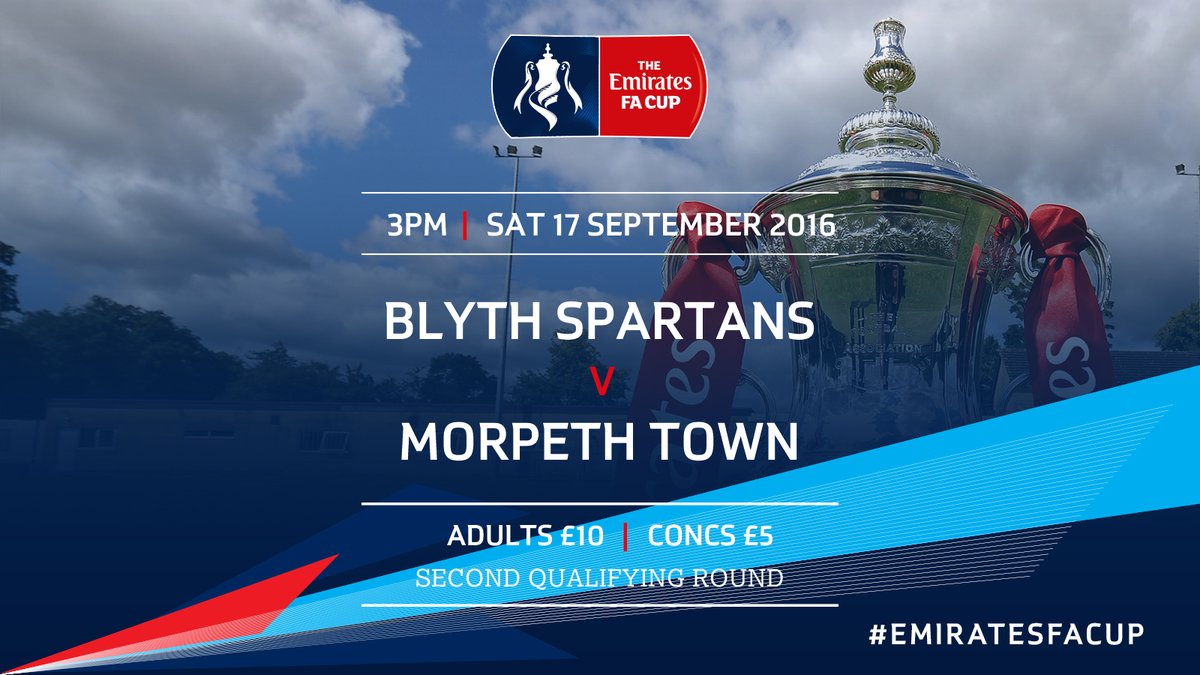 TEAM NEWS
Blyth Spartans face a tasty local Northumberland derby against FA Vase holders Morpeth Town – as both sides look to progress into the next round of this season’s Emirates FA Cup.

Spartans saw off fellow Evo-Stik Premier League side Frickley Athletic 3-1 in the last round at Croft Park, which will also host this Saturday’s second round qualifying round tie. Meanwhile, the Northern League side will be hoping to record another cup upset – after they recorded a 4-2 home win over Colwyn Bay in the first qualifying round.

Blyth go into the game in excellent form, having won each of their last five games in all competitions and recording clean sheets against Sutton Coldfield Town and Marine in their last two victories.

Town currently sit in sixth-place in this season’s Northern League, with 14 points from eight games. They stunned Shildon with a 2-1 win last Saturday, but Morpeth will be disappointed that their impressive victory over the league leaders came before a heavy 3-0 midweek defeat at Penrith.

Tom Wade’s side were all smiles when Alex Nicholson made his comeback from injury off the bench during Tuesday’s 1-0 win over Marine, but would have been left worrying over the fitness of Emirates FA Cup hero Jarrett Rivers on Thursday night – after the winger appeared to pull up in training.

IN THE AWAY DUGOUT
Nick Gray and Dave Malone – Formerly of Northampton Town, Durham City, Bedlington Terriers, South Shields and West Allotment Celtic, Nick Gray took Morpeth to a fourth place finish in his first season at Craik Park – after the club narrowly avoided relegation the season before he joined – and has led the club to an improved finish every year.

Dave Malone was brought in as co-manager by Gray at the start of the 2014/15 season and he was a big hit on and off the field – as the pair led Town to FA Vase glory with a 4-1 win over Hereford at Wembley last season.

DANGER MAN
Paul Robinson – “Robbo” needs no introduction to the Spartans supporters, having enjoyed two spells at Croft Park before making the switch to Craik Park with Damon Mullen over the summer.

Robinson has hit the ground running at Morpeth and is already the club’s top scorer this season with 11 goals in 11 appearances, more than double that of his nearest challenger. That total includes his brace at Colwyn Bay in the last round, so he will surely be desperate to net in the Emirates FA Cup again against his former employers.

There have been nine previous cup meetings between Blyth Spartans and Morpeth Town, with all of them coming in the Northumberland Senior Cup:

There have only ever been two league meetings between Blyth Spartans and Morpeth Town, when took place during the 1946/47 Northern Alliance League season: