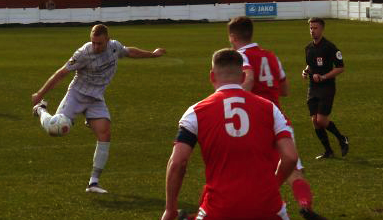 Defender Louis Laing was delighted to net his first goal for the club in Saturday’s 3-0 win away at Ashton United.

The former Hartlepool United man lashed home a half volley from 15 yards out – picking out the top corner.

“It’s always nice to score but the best thing is the win. We needed that win and we a clean sheet in the process.”

Laing contributed the second goal of the game with a stunning finish in the 12th minute:

“I had to pluck it down from the air and the strike was just a bit of finesse.

“I’m known for that sort of thing,” joked the 26-year-old

Spartans boss Alun Armstrong also praised the defender’s performance after Blyth extended their excellent away form, avoiding defeat for the 10th time in their last 11 trips away from Croft Park:

“He is just getting better and better,” suggests Armstrong, “He has been getting more confident with the lads and that is the key, we’ve been patient with him.”

“He was a bit rusty when he came back but his performance today was just unbelievable.

“His passing is really good, he reads the game ever so well, I’m delighted with how he is developing.”

The Spartans boss now has a plethora of options at the back, with Jordan Watson waiting in the wings along with Ryan Hutchinson – who is set to feature for the reserves mid-week.

But Laing and Buddle currently hold the shirts – and their after their performances against Ashton, they are willing to give them up without a fight.