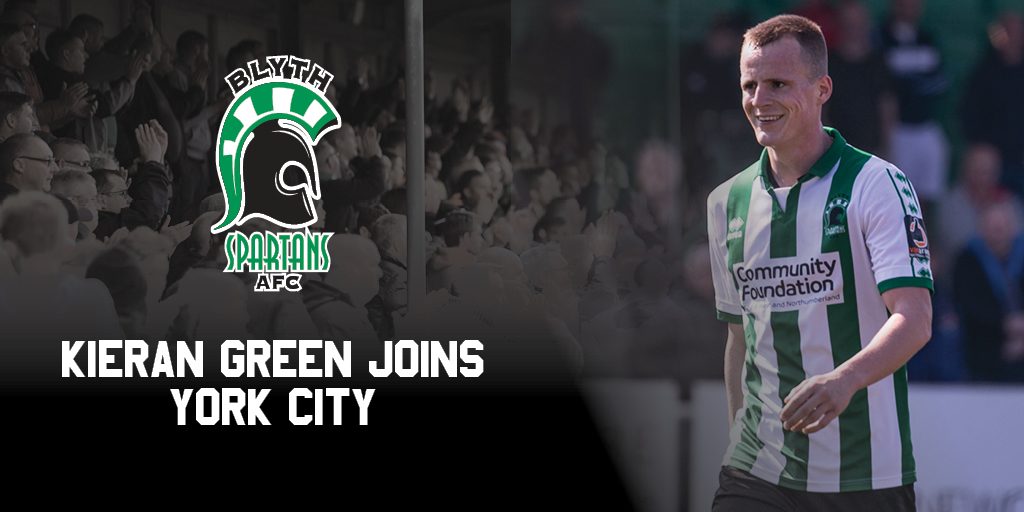 Blyth Spartans must announce the departure of midfielder Kieran Green – who has signed a full-time contract with National League North outfit York City.

The energetic midfielder joined the club during the 2017/18 season for two spells on loan from National League side Gateshead – making 12 appearances, scoring once.

Alun Armstrong secured the fan favourite on a permanent deal at the beginning of the 2018/19 season with the midfielder being instrumental in the club’s run to the play-offs last season.

In total ‘Greeny’ made 58 appearances for Blyth Spartans, finding the back of the net on eight occasions.

“I would like to thank everyone associated with Blyth Spartans,” said Green, “I’ve really enjoyed my time at the club.

“When I arrived I hadn’t played many first team games, Blyth gave me the opportunity so I thank the club for that.

“I was happy to play a part in the season we had, and although we came short in the play-offs I will always look back at the season with good memories.

“Another big thank you to the fans for taking me in and showing the team great support.

“I wish the club and the best next season.”

The club would like to like to thank Kieran for all his efforts over the past two seasons at Croft Park, and we wish him well in his future endeavours.