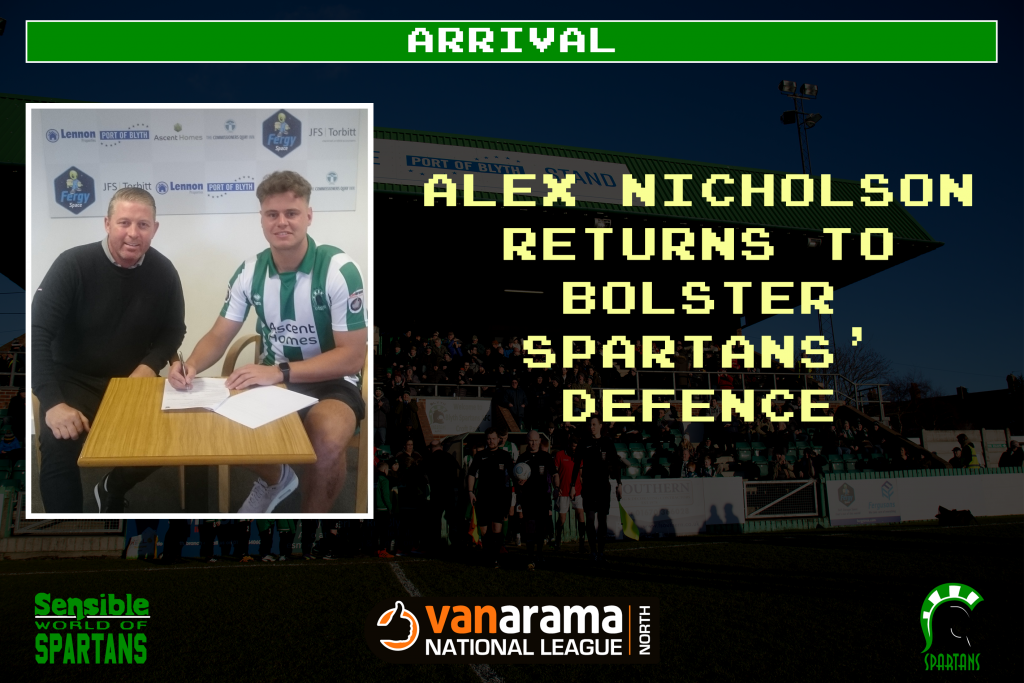 Blyth Spartans are delighted to announce the return of defender Alex Nicholson ahead of the 2018/19 Vanarama National League North season – joining from Evo-Stik Northern Premier League Side South Shields.

Nicholson, 24, is no stranger to Croft Park having spent a two and a year spell with the club between 2014 and 2016. Primarily a right-back – but capable of playing in a multitude of positions – Nicholson came through the Newcastle United academy before joining Preston North End.

After a loan spell at Chorley, the former Welsh U19 International joined Spartans – making 107 appearances in the green and white, netting seven times. His time at Spartans included the famous FA Cup run of 2014/15 – making six appearances along the way, including starting the 2-1 win away at Hartlepool United in the second round and the third round tie against Birmingham City.

He then joined South Shields in December 2016 – helping the club to a famous quadruple – also starting in their FA Vase final victory over Cleethorpes Town at Wembley Stadium. It total Nicholson made 55 appearances for the Mariners, netting three times.

And manager Alun Armstrong is ecstatic to welcome Nicholson back to Spartans:

“I said at the time Alex left the club that I didn’t want him to go, so I’m delighted to welcome him back into the squad.”

“He adds strength to our back four, and he’s capable of playing in multiple positions – which is something we have to look for in a player at the moment.”

“We needed to bring in another right-back, and that’s what we’ve done.”

BSAFC TV will have the first interview with our new addition in the coming days.