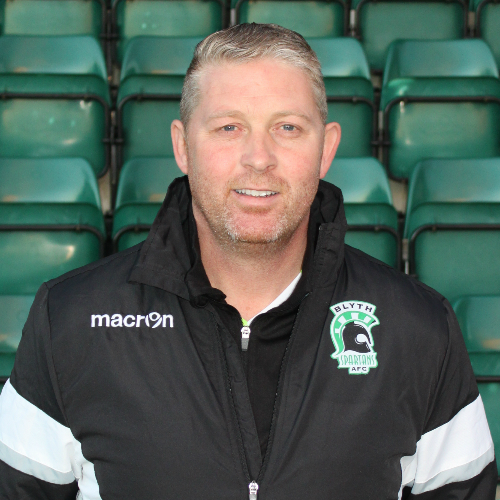 Alun Armstrong had a damning message for his Blyth Spartans squad following their disappointing 3-0 defeat at the hands of Warrington Town – as their “pedestrian” play angered the new manager in just his second game in charge at Croft Park.

After an encouraging start to his managerial reign with a point against a strong Spennymoor Town side last week, Armstrong was close to tearing his hair out after seeing his side limp lamely to their fourth defeat in five games on Tuesday.

And the former Ipswich Town and Middlesbrough striker didn’t mix his words regarding the performance – as he highlighted their lack of effort and called for his players to perform for him or risk being replaced.

Armstrong said: “First ten minutes, we were knocking the ball around well and we looked really creative. All of a sudden, once we conceded, you could see the confidence sap out of them.

“That’s a shame – as they are good footballers. I could go out there myself and just bounce the ball around in front of people and not be effective though, so they need to start affecting games and they need to look at themselves and ask themselves ‘What did I really do in that game?’ and I could count on one hand collectively what someone did in that game.

“That one that hit the woodwork from Carty [Andrew Cartwright] could have changed the game if it goes in just before the end of the half, but you get what you deserve in football. it would have been a travesty if we’d been able to escape with anything from that game though, because the lads would have went away thinking they had done well and that’s nowhere near where they should be.

“If they want to play here, then they need to lift their work-rate and really show me that they really want to be here. I’ve told them that I don’t want to have to bring players in, because I’ve been told we’ve got a good group, but I’ll go out and bring players in if I have to.

“They’re getting first shot at it and it’s the first time I’ve seen most of them in these last two games. At the minute, I don’t know what I’ve got – as we’ve been very up and down so far and I need them to show me what they’re capable of.”

Blyth had ended a three-game losing run with that hard-fought point against Spennymoor, but returned to their seemingly old ways with a woeful performance and result against Warrington.

Armstrong admitted: “We just went from one extreme to the other. You could see that they wanted to play last Tuesday, the work ethic was there and they want to play for each other.

“We seemed to fold and not many people wanted the ball. When they had the ball, they wanted to play in front of people and not in the dangerous areas in behind.

“It was flat. It was pedestrian, some of the way we were playing at times. Like I say, I could have gone out and done what half of them were doing out there, which is what I told the lads at half-time.

“There’s been five games now where, perhaps, the performances haven’t been good enough and I’ve been told they’re a good group when I came in. I’ve been brought in to help them with the tactical side and give them a little bit of knowledge, but if we don’t work hard then we’re going to get beat.

Having seen his side stop the rot with a clean sheet in their last game, the Blyth boss was left bemoaning his decision to switch back to the formation favoured by his predecessor Tom Wade – after seeing Warrington sink his side with three goals.

Armstrong added: “If you don’t put a shift in, you’re not going to get a result. I keep saying that to them and that’s the first thing they have to do.

“That’s why I put them in a 4-4-2 against Spennymoor. Then I got told that they love to play football and they keep the ball really well, so we go into the match in a 4-3-3 and it’s so slow and pedestrian.

While he partly took the decision to switch back to 4-3-3 because of the players’ preference to it, the calf injury suffered by Daniel Maguire in that draw with Spennymoor meant Armstrong was unable to play his favoured two up front – as a late replacement was unable to be brought into the club before Tuesday’s game.

He explained: “Nipa [Maguire] is a massive miss. I’ve been trying to get someone in, but it fell through at the last minute and that also massively affected how I chose to set up for the game.

“It’s so frustrating when you’ve gone from such a good, solid start to having to change your system straight away because we don’t have the backup there.

“Young Zak [Atkinson] wasn’t available either, so I had no other strikers and – unfortunately – Luke had do the lone man role up front. In a way, I think it was a really difficult task for him – as we weren’t looking forwards anywhere near enough as we should be and I think everyone in the crowd could see that.

If his son’s job of leading the line wasn’t hard enough for the young striker to begin with, then Sean Reid and Matty Pattison opting to play deep alongside Stephen Turnbull only added to the burden – as Armstrong senior was left infuriated with his only forward’s isolation up top.

Armstrong said: “That was the biggest thing – as you could see we were just standing telling them [both] to get up the pitch and I couldn’t understand – even though I’d gone through it all with them – why they were all coming to sit and play as a flat midfield.

“Why they were wanting to get the ball forward playing like that, I don’t understand. Even if it goes forward to Luke, then he’s got no support and that’s what’s really frustrating.

With Spartans playing host to Mickleover Sports on Saturday afternoon, Armstrong revealed that he is expecting his players to put in a much better performance to halt their slide down the Evo-Stik Premier League table.

Armstrong said: “I’ve asked them for a big response on Saturday. It’s only them that can change it, not me.

“I can go and show them the tactics, tell them to do this and that etc but, unless they cross the line and work hard for each other, it’s them that will get the flak. Yes, some of it comes back to me, but it’s them lot that aren’t willing to put the work in – and if that happens – they can move on and I’ll bring someone else in.

“I’m already looking, obviously, with Nipa still expected to be out for another week or two and I’m trying to get someone else in that fits his type of mould. We have a few similar strikers here, but Maguire is unique.

“He is very quick, he closes people down, he nicks things and he can create sheer havoc. We don’t have anyone else like that, so I think that’s what we’re short of at present.”