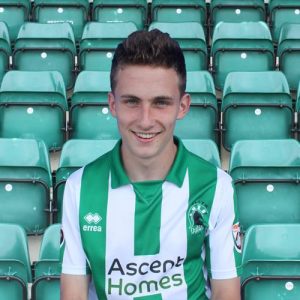 Blyth Spartans midfielder Jack Butler has been named in the England Schoolboys Under 18s squad – after impressing during a two-day meet up at Lilleshall National Sport Centre last weekend to retain his place in the side from last season.

Butler was one of 32 hopefuls that played in two trial games over the weekend, in an effort to cement their places in the 18-man squad for the remainder of the season. The young England side beat their Royal Air Force counterparts 2-1, before following that up with a rousing 6-0 demolition of the Royal Navy.

The young Spartan caught the eye in the latter fixture with a series of determined runs and was unlucky not to grab himself a goal – as he twice went close in the early stages, with one of his shot rattling the upright.

And club manager Alun Armstrong was delighted that the talented 17-year-old – who has featured for both Blyth Spartans Reserves and the senior side – had been able to retain his spot in the England Schoolboys setup for a second season.

Armstrong commented: “It’s a fantastic achievement for the kid. He’s still very raw and he’s learning all the time, but he’s focused, he’s working hard and he’s another one that’s attracting attention from other clubs – as he’s being monitored by clubs higher up.

“It’s all great and positive news for him, but we just have to make sure we do right by Jack. The amount he has come on – since training with the first team – has been unbelievable and we’ve seen a massive jump in his performances and he’s not far away.

“There’s no point rushing him though. We’ve got to take care of him, because he is a talent without a shadow of a doubt.

“It would be daft for me to throw him in against some of the harder teams in this league, but it would be nice if we could try and get him in there at some point. Again though, we have to make sure we’re in the right position to do that.

“As I say, it’s a fantastic achievement for Jack and I think he’s the only one to be called up two years on the bounce, so I have to say a massive well done to him. We just have to keep a hold of him, because he’s definitely one for the future.”

With the Blyth Spartans Reserves side aiding Butler’s progression – despite only gaining Northern Football Alliance status at the start of the season – the 42-year-old Spartans boss also revealed that the second string side at Croft Park is already proving to be more than worth the effort to set it up last summer.

When asked the reserves side was paying instant dividends with Jack’s progress, Armstrong replied: “Massively, it has and we’ve used some of the players this season when we had the smaller squad.

“I think it did highlight to the board that we did need a stronger squad for this division, but we used them and we’ll continue to use them as the season goes on.

“It’s something that I strongly believe this club needed and I think it’s definitely paying dividends. It’s rewarding when you see someone like Jack get picked for England because of it, because his progress has been outstanding.”