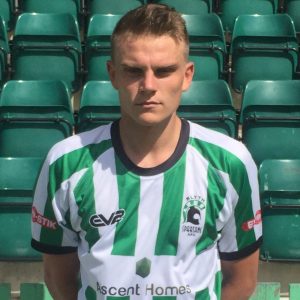 Spartans defender Ryan Hutchinson will come up against old friends in Saturday’s Emirates FA Cup tie, but he is adamant that his time at Morpeth Town gives him an added incentive to help Blyth win this weekend’s second qualifying round tie.

The 23-year-old ex-Celtic and St Johnstone youngster joined Northern League side Morpeth after moving south of the border, before signing for Blyth from Seaton Delaval during the 2013/14 season.

“Hutchy” still knows a lot of faces at Craik Park – including former Spartans Damon Mullen and Paul Robinson, who left Blyth for Town in the summer – but he believes that being drawn against his former club has given him even more of a reason to play well in Saturday’s local Northumberland derby.

“I’m motivated to win every game, but it does give you that little bit more of an edge to do well when it’s one of your old teams. I know a lot of the lads there, as I say, but I just want to win and get through to the next round.

“It’ll be good to see the likes of ‘Damo’ and Paul Robinson again. I hear they’re doing well at Morpeth, so I’m happy for them that they’ve managed to settle in there.”

Hutchinson has started the season in inspired form, to the point that he has picked up the Man of the Match award in each of Spartans last two games and is surely a front-runner for the Port of Blyth Player of the Month award for September already. However, after being forced to sit out the end of last season, the star defender is happy to just be out playing once more.

He added: “I’m enjoying my football at the moment and I’m glad to be playing every game. It’s good to be back, after being injured last season and I’m loving every minute of it.

Despite having won five games in all competitions, Spartans – more than anyone – know that form counts for nothing in the Emirates FA Cup. Despite that, “Hutchy” is still confident that Blyth can progress into the next round at the expense of the current FA Vase holders – as the competition inspires the players to raise their performances.

He said: “With the lads we’ve got, we have to be confident of getting a result in every game that we go into. Obviously, it’s the best team on the day that wins and I hope it’s us on Saturday.

“Every FA Cup game has a level of expectancy for the lads who were here two seasons ago, when we played Birmingham in the third round. There’ll be an extra edge to this game, but we’re all still massively looking forward to it.”

Saturday’s game will be the fourth successive game at Croft Park within a fortnight, but Hutchinson doesn’t think the build-up of fixtures has had an effect on his teammates – as the defender has called on the rest of the Blyth squad to record their third clean sheet in as many games.

He explained: “I think everyone seems to be pretty fit in games. Sometimes, you see sides dying off towards the end, but we’ve not been doing that and it’s good to see.

“Obviously, we all want to play as many games as we can. That’s why you play football.

“We’d rather have extra games than more training sessions, so we’re all looking forward to each game as they come along.

“There’s been quite a lot of games close to each other recently, but the lads still look fit and they’ll all be raring to go come kick-off on Saturday.

“If we all stick together and we can keep our shape, there’s nothing stopping us for going and getting another clean sheet. If the team puts a good shift in, then I’m confident we can do it.”