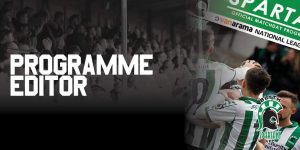 Blyth Spartans would like to welcome Russell Wynn as our new Programme Editor for the upcoming season.

Russell joins with a wealth of experience in Programme Editing having designed and sourced his own content at North Shields during his long spell as Media Manager.

The quality of his programmes was recognised in 2017, when he won the Northern League Programme of the Year Award.

He has carried out a similar role with the Northern League after producing programmes for cup finals such as the Brooks Mileson League Cup and the Ernest Armstrong Memorial Cup.

Additionally, Russell has experience in social media, which is welcomed bonus as we look to enhance our match day coverage.

“Having worked with Russ at North Shields, I know first-hand just how good his programmes are. I look forward to you seeing what he produces.

“To say he is a welcomed addition to the media team is an understatement.”

Russ has a family connection to Spartans through his Uncle Jimmy, who played for the club in the early 1930s

On joining the club, Russ said: “I’ve missed being involved with a club after my time with North Shields,” who last season spent his weekend groundhopping.

“When the opportunity at Blyth came along, I was quick to apply. They are a massive club in the non-league and are run in the right way.”