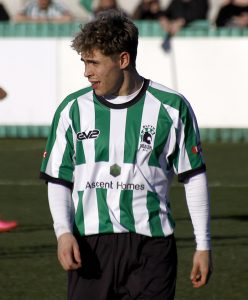 Blyth kicked off their pre-season campaign at the second attempt – as they travelled to the Wanted Stadium to face West Auckland.

The game got underway in glorious sunshine as Blyth kicked uphill, looking to get their pre-season campaign off to a winning start. The first few minutes were cagey though – as both sides looked to get to grips with the game.

The first chance fell the way of Spartans, when Adam Wrightson – operating at right wing-back in a 3-5-2 formation – drove forward, before cutting in on his left and firing wide of the far post.

New signing Dale Hopson was showing glimpses of why Blyth secured his services and, on 15 minutes, he cut in from the left before curling an effort that produced an outstanding save from former Spartan Adam McHugh in the West Auckland goal. From the resulting corner, one of the trialists saw his header deflected over the bar.

It took the hosts 20 minutes to register an effort and, when it arrived, it was well off target. Nathan Fisher got in down the left, but his effort from a tight angle was well wide of the far post.

A frenetic few minutes continued as Blyth burst forward and Wrightson once again found time and space, but saw his initial effort blocked by McHugh and his rebound smothered by the keeper. Play then switched back down the other end of the pitch – as Fisher once again tried his luck, but it was straight at the trialist in goal for Blyth.

Only seconds later, Blyth almost took the lead through Robert Dale. He collected the ball on halfway and, having spotted McHugh off his line, lifted an effort that just cleared the cross bar.

As the half wore on, more chances were created by both sides. On 37 minutes, Hopson and Dale combined to great effect and allowed the former a shot on goal, but it lacked the power to trouble McHugh.

West Auckland responded with a fantastic run down the right by Denver Morris, who showed great pace to get past Michael Liddle before seeing his shot deflected into the arms of the keeper at the near post.

A minute later – as play switched to the other end of the pitch –  Blyth won a free kick 20 yards from goal. Hopson lined it up with his right foot, but curled his shot inches wide of the post with McHugh beaten.

With only moments of the first half remaining, a fantastic through ball by a trialist allowed Wrightson to run on to it and finish well past McHugh. It was the last action of a half where Blyth created the better chances, but were only able to go 1-0 up.

The second half took longer to get going – after both sides made numerous substitutions. Indeed, the first chance of the half didn’t come until after the hour mark – as Andrew Cartwright played a nice one-two with a trialist, before cutting the ball back for Jordan Laidler who saw his shot deflected wide.

On 78 minutes, West Auckland were awarded a penalty, when a trialist fouled Fisher in the box. Fisher stepped up himself to send a different trialist goalkeeper the wrong way from the spot.

The final chance of the game fell the way of the home side – as Fisher once again was able to work space for a shot, which took a wicked deflection and forced the keeper into a fine save to keep the scores level.

The game ended 1-1 with perhaps the most important aspect of the game being getting game time into the players. Blyth are on the road again on Tuesday evening, when they travel to Shildon – as they continue their preparations for the upcoming season in the Vanarama National League North.