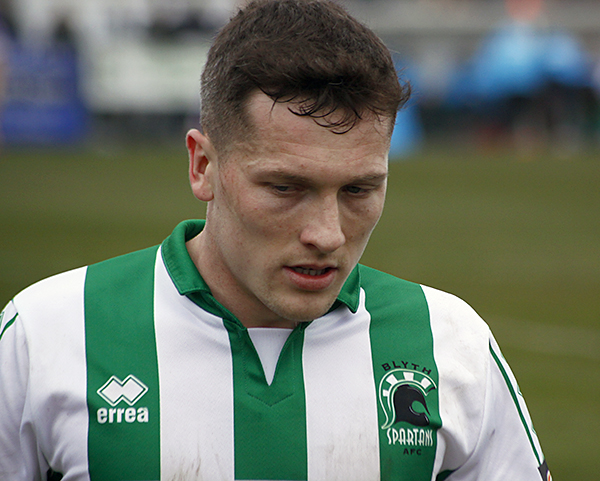 Dan Maguire scored the only goal of the game to shock league leaders Stockport County and maintain Blyth Spartans push for the play-offs with their fourth successive win.

Maguire slotted home his 20th league goal of the season 19 minutes in after Spartans caught the hosts on the break.

Spartans boss Alun Armstrong made four changes from the side that dispatched Nuneaton in midweek, with Louis Laing sitting out the first of his three game suspension.

Stockport almost took the lead in the first six minutes, a long clearance by keeper Ben Hinchcliffe caught the Spartans defence napping before Paul Turnbull turned the ball across goal for Darren Stephenson but he could only fire wide from six yards.

The home side would rue that miss 13 minutes later as Spartans caught them on the break. Green combined well with Jarrett Rivers before playing in Maguire, who showed great footwork to get half a yard for a shot before slotting home inside the far post.

Maguire probably should have added a second just five minutes before half time after another quick counter. The Spartans striker slipped the ball through to Rivers who instantly cut it back only for Maguire to fire straight to the keeper who did well to close down the angle.

The hosts piled on the pressure late in the half, but struggled to create a clear opening, with Scott Duxbury heading their best chance harmlessly over on the stroke of half time.

Perhaps as a credit to how Spartans nullified Stockport, manager James Gannon made two changes at half time, including bring on top scorer Matty Warburton. And it seemed to have an impact as the home side bombarded the Spartans box with a series of corners.

But out of the blue it was Spartans who almost doubled their advantage 6 minutes into the half. Stealing the ball in midfield, Green slipped in Maguire who beat the offside trap before laying the ball across goal for Rivers to tap home, but the Spartans winger could only hit the bar with the goal at his mercy.

The game started to turn scrappy as Spartans were more than happy to disrupt their opponents, but Stockport did manage to carve out a chance on 55 minutes. Duxbury’s cross from the left hand side took a fortunate deflection and found its way to Osborne, but his point blank header was well saved by Peter Jameson.

Stockport’s bad day at the office continued as they struggled to get through a stubborn Spartans defence well marshalled by Nathan Buddle and Jordan Watson, and their day was probably best summed up by Duxbury gifting two successive throws straight to a Spartans player – much to the annoyance of the home crowd.

In the last 10 minutes it was much of the same story, however as the clock hit the 90th minute Spartans hearts were in mouths as Frank Mulhern manged to get some space on the byline and saw his mishit cross hit the bar.

However, that was as close as Stockport would get as Spartans secured a memorable victory. They now go into the final three games just three points behind Telford United who occupy the final play-off spot.