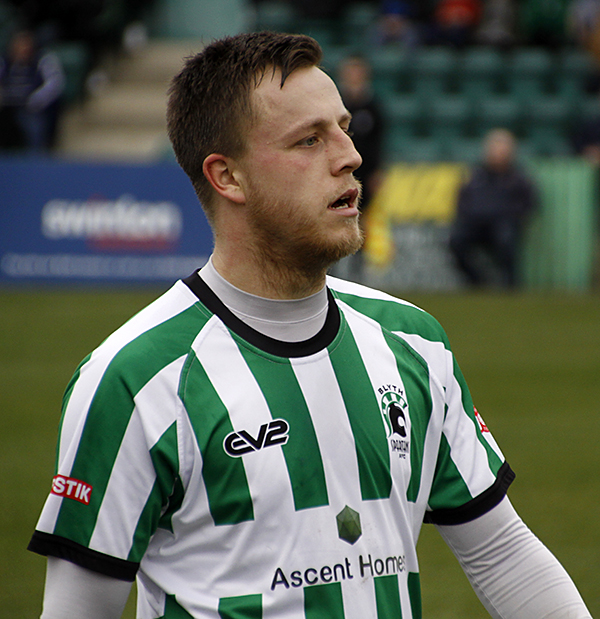 Blyth Spartans continued their preparations for the new season as they travelled to Dean Street to face the Railwaymen of Shildon.

Spartans went immediately on to the front foot and took the lead just after the game kicked off.

The ball was fired across the box and Robert Dale arrived at the back post, only to see his effort kept out. However, the rebound fell to the onrushing Jordan Laidler and hestabbed home from barely a yard out.

Shildon looked to gain a foothold in the match and had a great chance to equalise on 8 minutes, when the ball found its way into the box and it took a fantastic last ditch challenge from Ian Watson to keep Blyth in front.

Robson was the next player to try his luck for Shildon after they won a free kick just outside the penalty area. The free kick was destined for the top corner until the trialist goalkeeper was able to tip his effort onto the bar and gather the ball at the second attempt.

Another of the trialists for Spartans was having a fine game down the right wing and, on 16 minutes, he saw his effort well saved by the Shildon keeper.

Only a few minutes later, the same young trialist was in the thick of things again – as his bursting run down the right saw his cross blocked behind for a corner. Laidler’s corner was met by the advancing Sean Reid, but his volleyed effort was over the bar.

The Spartans looked to try and seize back the initiative and, on 24 minutes, had another opportunity. Dale Hopson turned defence into attack to release Dale down the left, he cut inside to beat two challenges before curling an effort wide of the far post.

The Railwaymen responded with Fenton who worked some space for himself before sending a left footed shot that was palmed over by the trialist in the Spartans goal.

Peacock was the next to try his luck for Shildon as he got the edge of the box before a fantastic block from David McTiernan stopped his attempt. The rebound fell kindly for Peacock again but his follow up bobbled well wide.

Blyth could have perhaps doubled their lead just before the interval when first Hopson seized on a piece of lax defensive play and saw his curled effort tipped wide by the ‘keeper. Laidler was next to try his luck and brought another fine save from the home custodian.

The trialist on the right for Blyth twice had chances as the half entered additional time. Firstly, a well worked corner found him 35 yards out and his strike was well held and moments later a cross field ball from Dale was controlled before firing straight at the ‘keeper.

Blyth continued where they left off at the start of the second as Jordan Watson was found at the back post from a corner but didn’t strike the ball cleanly and the chance was cleared.

Dan Maguire making his first appearance of pre-season was found in the box and after finding some space curled an effort narrowly wide with the ‘keeper beaten.

The pressure continued as Hopson skinned two defenders before getting into the box but his effort was smothered as he was about to pull the trigger. Hopson was at the heart of the next move as he seized on a defensive mistake but was cynically blocked as he drove towards goal. Dale took the free kick but the wall did its job and it went behind for a corner.

Shildon had their first chance of the second half from the resultant corner as they broke at speed and the ball came to Fenton who forced a fantastic save from the trialist in the Spartans goal.

On 78 minutes, Maguire was a nuisance for the Shildon defenders and looked to have won a penalty after being caught by two defenders in the box but the referee waved away the vociferous appeals from players and fans alike.

Shildon seized on their moment of good fortune only 3 minutes later as Reynard was found on the edge of the area and unleashed an unstoppable effort that flew into the top corner.

The Railwaymen buoyed by their equaliser pressed in search of an unlikely winner in the remaining minutes. Curl and Burnicle both had clear chances to win the game with the former bringing a fantastic reflex save from the ‘keeper and the latter skewing wide when one on one.

The Spartans will be hoping to continue their unbeaten run going as they play host to Carlisle on Saturday in the first of several high profile games to be staged at Croft Park in the coming weeks.