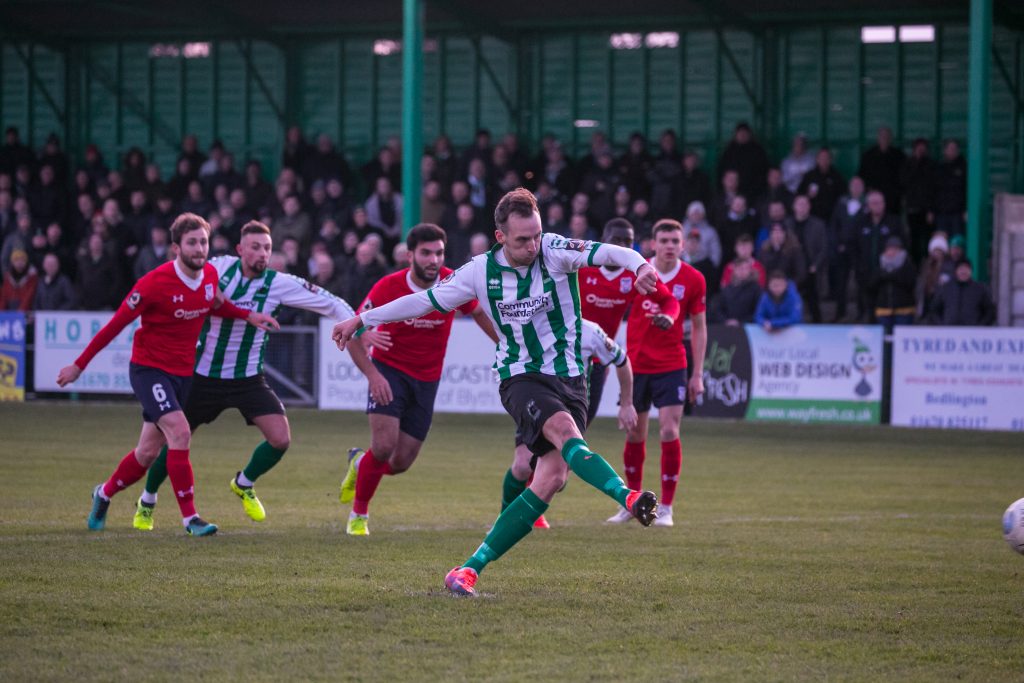 An 83rd minute Bradley Fewster goal – 30 seconds after Macaulay Langstaff has a goal ruled out for offside – was the difference between Blyth Spartans and York City at Croft Park.

Blyth opened the scoring when Hamza brought down Cunningham in the box and Spartans were awarded a penalty that Reid took and scored in the 15th minute.

York equalised in the 35th minute when Langstaff dribbled the ball down the left side of the pitch then managed to send a low cross across the face of the goal. No one could get a clean touch on it so Jameson was able to clear it off the line but only as far as the feet of Wright who smashed it into the net.

Blyth got the winner in the 84th minute when Blyth went on a counter attack after York had a goal ruled offside. The ball was launched up the pitch to Fewster who headed past Bartlett then tapped it into the net.

York started off strong when Wright went down the right side of the pitch then played a low ball across the face of goal to Langstaff who’s shot was impressively saved by Jameson.

Blyth got a chance in the 13th minute, Green got the ball onto his left foot outside the box then had a strike at goal that was saved by Bartlett.

Blyth were given a penalty in the 15th minute when Hamza brought down Cunningham in the box. Reid stepped up to take the penalty and scored it to give Spartans the lead.

Wright had a chance to equalise for York when he got the ball outside the box, moved it onto his right foot and had a curling effort at goal that went narrowly wide of the far post.

In the 20th minute, Rivers pulled out some tricks with a few step overs to get past the York defence. He then got the ball onto his left foot and had a curling effort at goal that went over the bar.

Holmes nearly scored a spectacular goal in the 23rd minute when he volleyed the ball with outside of his foot and it went narrowly wide of the far post.

York got a chance in the 33rd minute when Agnew played a lobbed pass through to Wright who had his shot at goal saved by Jameson.

York got their equaliser 2 minutes later when Langstaff dribbled his way down the line then played the ball across the face with no one getting a clean touch, Jameson managed to claw it off the tine but only as far as the feet of Wright who smashed it into the net to make it 1-1.

Hamza for York City seemed to forget what sport he was playing in the 43rd minute as he blatantly handled the ball and given a yellow card for it.

The second half did have many clear chances at goal until the 57th minute when Oliver found himself in space outside the box and unleashed a strike at goal that went over the bar.

Buddle managed to get a shot away from a corner but his shot was blocked on the line by Law.

Wrightson came on as a substitute and made his mark in the 66th minute when he ran down the left wing, cut onto his right foot and found Oliver in space. Oliver then had a shot at goal that went wide of the far post.

In the 79th minute, substitute Fewster had a shot outside the box that went wide of the far post.

York thought they scored the winner when Langstaff headed past Jameson but the goal was disallowed as it was offside, Blyth took the free kick quickly and Jameson found Fewster who headed it past Bartlett then tapped it into the net to give the Blyth lead in the 84th minute.

Blyth managed to hold onto their lead with York’s best chance to equalise being a volley by Agnew in the 90th minute that was saved by Jameson who was awarded man of the match for his performance.

Blyth’s next game will be away at Spennymoor Town, who they drew 2-2 with on Boxing Day in the home fixture, on the 1st January.

Man of the Match – Peter Jameson