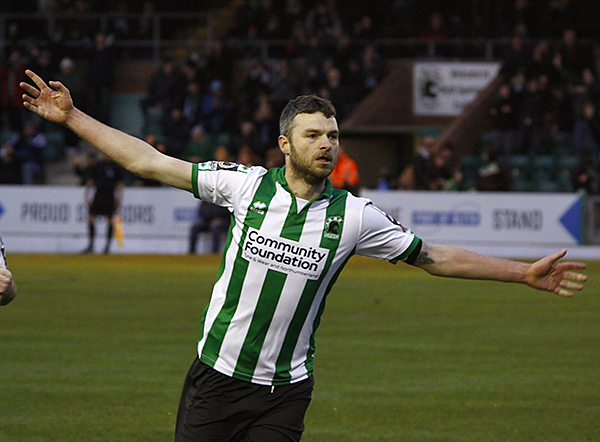 Robbie Dale got his 200th goal for Spartans in a heated game that ended in a draw that continues Blyth’s unbeaten run to 12 games.

Alfreton opened the scoring in the 33rd minute when Tom Allan headed home a corner.

Spartans equalised in the 37th minute when Ramsbottom handled the ball outside the box and Blyth were awarded a free kick. Dale scored the resulting free kick to level the score and get him to 200 goals for Blyth.

Blyth got the first chance of the match in the 6th minute when Holmes ran down the left side of the pitch then cut into the box. He managed to get a shot away but it was deflected off a defender and fell to the feet of Oliver outside the box who’s shot went wide of the far post.

It was a fairly uneventful first half with the next best chance coming in the 28th minute when Maguire got the ball just outside the box, managed to the defender and get some space in the box but his chipped effort was easily saved by Ramsbottom.

Alfreton got a chance to score in the 30th minute as the box bounced around the Blyth box from a long throw in and eventually fell to the feet of Clackstone outside the box who had an audacious strike at goal that went over the bar.

The away side did score three minutes later when Allan headed home from a corner to give Alfreton the lead in the 33rd minute.

Blyth got a free kick in the 36th minute when Ramsbottom came out his box and handled the ball. The ref booked the keeper and Dale stepped up to take the free kick. He scored the free kick low in the bottom corner of the goal to equalise for Blyth and to make it 200 goals for him in a Spartans shirt.

The last chance of the first half fell to Maguire who got on the end of a great ball from Dale then charged into the box and played a ball across the face of goal but unfortunately an Alfreton player got on the end of it to clear it for a corner.

Alfreton started the second half strong as Peniket crafted himself a chance as he got the ball on the right wing, cut onto his left foot and tried to curl it into the net but his shot went over the bar.

The visitors continued to put pressure on Blyth and in the 61st minute, Ramsbottom hoofed the ball up the pitch, Peniket took it down, ran into the box and had a shot across goal that went wide of the far post.

In the 78th minute, a poor pass back to Ramsbottom created a chance for Blyth as Maguire charged it down and the keeper kicked it against Maguire but the ball went over the bar.

The final chance of the game fell to Dale in the 82nd minute. Oliver whipped in a corner that was headed away but only as far as Dale who volleyed it wide of the far post.

Blyth extend their unbeaten run to 12 games and Dale will be happy with his 200th goal in this game. Blyth’s next game will be at Croft Park against Boreham Wood in the FA Trophy on the 12th January.

Man of the Match – Robbie Dale