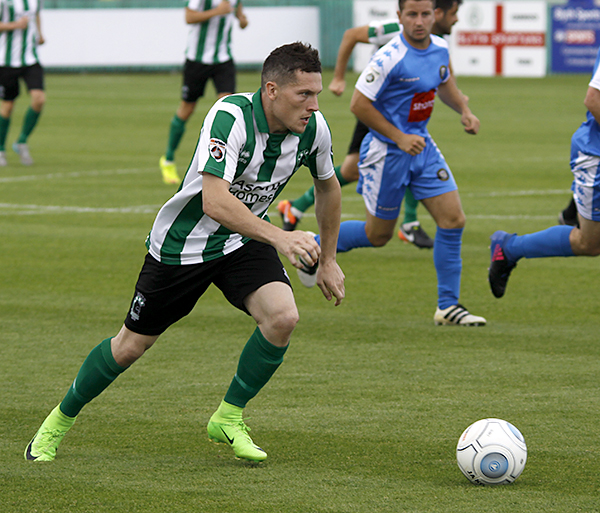 Man of the Match Maguire scored his first two either side of Nathan Buddle’s header, which saw the home side race to a 3-0 lead inside 14 minutes. The striker then smashed home his third on 37 minutes, before Harry Vince scored on the stroke of half-time for United.

The Pilgrims reduced their deficit further on 71 minutes through substitute Karl Hawley, but Jarrett Rivers restored Spartans three-goal lead just eight minutes later – as Blyth hat-trick of wins within a week saw them up into fourth place in the league table.

The home side were forced into one change from the side that saw off FC United of Manchester 3-1 in midweek. With Lewis Horner missing out through a knock, Andrew Cartwright came in to fill the right-back berth for Blyth and make his first start of the season.

Boston created the first chance of the game with just two minutes on the clock. A corner picked out Adam Chapman free, but his header was straight at Peter Jameson.

Spartans’ opening effort followed 60 seconds later, when Rivers picked out Maguire in the area. The striker was able to take a touch, but his shot was blocked away.

After two goals in midweek, ‘Nipa’ didn’t have to wait long for another – as he opened the scoring for a second successive game. A short corner routine from the hosts was only partially cleared to Maguire, who headed the ball down and into the bottom corner to give Blyth the lead.

Spartans nearly doubled their lead on nine minutes, when Maguire’s expertly played dummy from Rivers’ cross allowed Robert Dale a shot at goal. That strike forced a fantastic stop from George Willis, at the expense of a corner.

The United stopper’s efforts were in vain though – as Alun Armstrong’s side doubled their lead with a well-worked set-piece from the resulting corner.

Rivers drilled a cross into the middle of the goal that was met by Buddle, who took advantage of some very lapse defending to power home a bullet header that gave Willis no chance.

Cartwright then had two chances in minute, when he first had a header at the front post that didn’t really test the keeper. His 14th minute cross soon after created another headache for Willis though – as the keeper had to desperately scurry across goal to stop the goal-bound ball finding the top corner by tipping it around the post.

It was a bad sense of déjà vu for the Boston keeper – as, for the second time in four minutes, his good work was undone from the resulting corner. Maguire picked the ball up in the area – following more bad Boston marking at the back – turned and fired home from close range to double his tally for the afternoon.

Maguire looked to turn provider three minutes later, when a lovely touch allowed him to play in Dale Hopson. The former Whitby Town midfielder took it just too far and Willis was able to gather.

Boston thought they’d pulled one back on the half hour mark, when James Clifton’s cross unknowingly ricocheted off Kabongo Tshimanga’s face just a few yards from goal. The change in direction caught Jameson out, but the ball bounced off the outside of the post and left United cursing their luck.

Their misery was compounded further still when Maguire completed his hat-trick on 37 minutes.

A long clearance from Ian Watson fell perfectly for the striker, who brought the ball down ahead of marker Jordan Keane. Maguire then took another couple of touches, before smashing the ball past Willis like he wasn’t even there.

Just as it looked as Blyth were heading into the break with a four-goal lead, Boston hit back with a goal bang on half time.

Some good play from Tshimanga saw the former MK Dons striker manage to keep the ball in and pull it back across goal at the by-line. Vince was there to scuff the ball into the back of the net from a few yards out, to give United a slight glimmer of hope – as the Spartans defenders’ appeals for the ball going out of play were ignored by the officials.

Blyth looked like they were happy to continue their set-piece success into the second half – as a free Sean Reid raced in to meet Rivers’ 48th minute corner. However, the ball just evaded the head of the lofty midfielder and the chance was gone.

With nothing to lose, Boston tried to assert their dominance on proceedings and that philosophy nearly resulted in a second goal on 54 minutes. Tyrell Waite nipped in at the near post to head at goal from a corner, but the ball flashed well wide of the back stick.

Spartans were down the other end three minutes later and some jinking trickery from Maguire nearly gifted last season’s top scorer his fourth goal of the game. Shooting from the edge of the area, ‘Nipa’ was only denied by a diving Willis – as the keeper tipped the ball behind again.

Maguire knocked the ball around Keane at the edge of the area on the hour mark, but was felled by a cynical block that earned the defender a yellow card. Dale stepped up to take the free-kick, but could only drive a fierce strike into the wall.

Dale then crossed in on 66 minutes, but it was headed clear. The ball went only as far as Hopson on the edge of the Boston box, but he couldn’t find the target with his follow-up effort.

James Clifton’s corner four minutes later made it’s way all the way through to Spartans substitute David McTiernan at the far post. The ball struck the leg of the midfielder and could have gone anywhere, but went safely behind for just a corner.

Or so Blyth thought – as Boston pulled another goal back from the ensuing set-play. The home side failed to clear their lines as the ball came back in and substitute Hawley – who’d only replaced Vince two minutes earlier – stabbed the ball in following a goalmouth scramble.

That warning spurred the home side into action once more though and they responded in kind, grabbing their fifth goal with just 11 minutes to go.

A majestic run by Adam Wrightson saw him leave Jan Yeomans for dead and power his way towards the by-line. The substitute – who’d taken the place of Dale – ended his run by fizzing a cross underneath Willis and into the path of Rivers, who had the simple task of tapping home from two yards to confirm another comprehensive victory for the club so far this season.

Fourth-placed Spartans will look to make it four wins from four games when they welcome Chorley Town to Croft Park on Tuesday evening (7:45pm kick off.)