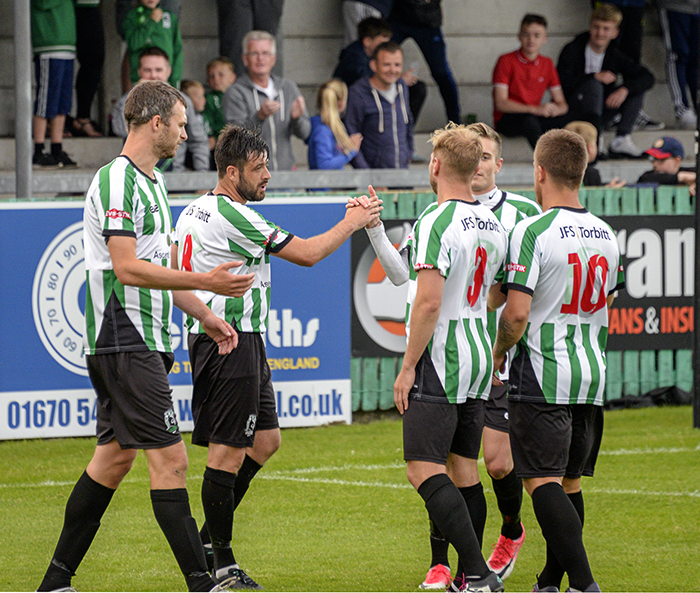 Blyth Spartans recorded their second successive victory of pre-season, with a 4-2 win over Middlesbrough XI on Saturday afternoon.

Boro struck back twice through Brandon McCarthy and George Miller in the last 20 minutes, but that only served to make the scoreline more flattering in a game that the Vanarama National League side dominated.

Summer signing Hopson made his first appearance at Croft Park since his big money move from Whitby Town earlier this summer. The Croft Park faithful would have been salivating at the thought of him joining Maguire up front for the first time, but he appeared to be deployed in central midfield behind a more advanced Laidler.

Meanwhile, there was no place in the Middlesbrough squad for former Spartans striker Luke Armstrong through injury, but they did name Algerian international Adlene Guedioura in the centre of midfield and Luxembourg’s Enes Mahmotovic in defence.

In a rather lively start, Jarrett Rivers twice got down the right. However, he was unable to pick out Maguire – after being thwarted by the offside flag and then Carl Robinson in the Boro goal.

It was to be third time lucky for the tricky winger though – as Blyth took the lead with just eight minutes on the clock.

A couple of step-overs were followed up by a low cross from Rivers, who placed a low cross straight at Maguire’s feet. Last season’s top scorer calmly took a touch, before side-footing in his first goal of the summer off the far post.

The Championship side’s representatives could have had an instant reply just 60 seconds later, but Spartans’ trialist goalkeeper showed great reactions when forced into a strong stop.

A sweeping Spartans move on 20 minutes nearly produced a carbon copy of Blyth’s opener, when Rivers was once again found free on the right. He tried to find Maguire once more with Tom Brewitt at sixes and sevens, but Robinson came to his left-back’s aid and plucked the cross out of the sky.

The home side were not to be denied though and Rivers picked up his second assist just one minute later – after playing a defence-splitting pass that left Mahmotivic standing with his arm in the air for an incorrect shout for offside.

Dale took full advantage of the hesitation and advanced towards goal, with Maguire in support. He could have played in his teammate for his second of the afternoon, but the Spartans captain unleashed an unstoppable effort across Robinson and into the roof of the net.

Laidler played an equally impressive through ball for Maguire on 25 minutes, but Mahmotovic more than atoned for his earlier error of judgement with a superb last-ditch tackle at the edge of the Middlesbrough area.

Nathan Buddle conceded a free-kick on the edge of Blyth’s box soon after, which presented Guedioura with a chance to score. The former Crystal Palace and Watford midfielder tried to curl one into the top corner around the wall, but could only find the side netting.

Another Boro chance following just prior to the half-hour mark, when a burst of speed from McCarthy caused problems for Buddle and Jordan Watson. Under pressure from the latter, the striker got too much on his shot and the ball flew harmlessly over the bar.

Blyth had the ball back up the other end five minutes later, but Maguire’s looping header – from Rivers’ ball from the right – dropped just wide of the far post.

Guedioura sent a testing long-range drive towards goal on 35 minutes, but Blyth’s trialist goalkeeper was able to save well and hold under pressure.

Six minutes after that chance, Rivers was bundled over in the area by Mahmotovic. However, referee Marc Edwards opted against adding to the Luxembourg international’s miserable afternoon and ignored Spartans’ shouts for a spot-kick.

With the first half coming to a close, Laidler lined up a 40-yard free kick. While some might have thought it would be speculative at best, his effort went just over the bar with Robinson clearly concerned.

Both sides opted for just the one change at the start of the second 45, with new signing Shaun MacDonald replacing the trialist keeper in the Blyth goal and Boro’s Patrick Reading taking the place of Jay Wilson.

Sitting on a 2-0 lead at the break, Spartans would have been forgiven for taking their foot off the gas. However, they kept up the same intensity and had two good chances to score within the first seven minutes after the restart.

Maguire was found free at the back post from Rivers’ high ball into the box, but could only power a header into the side netting from a tight angle. Rivers then broke through himself on 52 minutes and chipped an advancing Robinson, but could only watch as the ball bounced back off the bar.

Spartans’ dominance then saw their lead increased from the penalty spot a minute later – after Dale beat two and was then brought down in the area.

Hopson – who scored nine penalties out of nine in all competitions for Whitby last season – stepped up and dispatched his spot-kick low to the keeper’s right. Robinson appeared to get a hand on it, but it was placed enough into the corner that he couldn’t deny Hopson a debut Croft Park goal.

Rivers was forced into the fence around the pitch following a strong challenge from Lewis Wing just before the hour mark, but Maguire had the sense to play on and drive down the right wing. His cross into the Boro box dropped perfectly for Laidler, who turned the ball home while sliding in at goal to make it 4-0.

Dale was next to try and get in on the action on 68 minutes, when he bamboozled Robinson with a chipped cross/shot towards the far post. However, it bounced just wide of the upright with the keeper static.

Boro finally broke Blyth’s back-line with 19 minutes remaining – after a poor clearance from makeshift centre-back Sean Reid, who had only replaced J Watson on 65 minutes. The ball ricocheted straight to McCarthy, who couldn’t miss from a couple of yards out.

Spartans huffed and puffed for another goal to assert their dominance, but Boro managed to reduce the deficit further still on 77 minutes – following more good work from McCarthy. The striker raced down the right and played a great ball in towards the near post, where Miller was there to nod past MacDonald and put some gloss on the scoreline for the visitors.

Blyth will hope to make it three wins in a row when they welcome Northern League side Morpeth Town to Croft Park on Tuesday night (7:30pm kick off.)