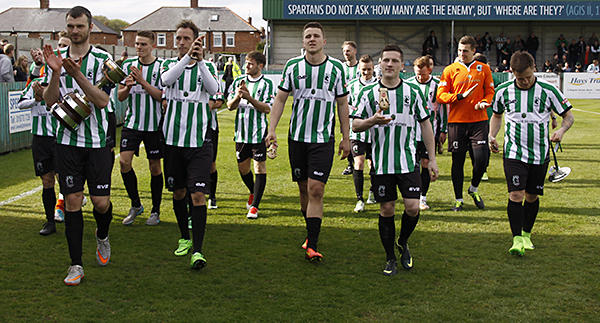 Blyth Spartans survived a spirited late showing from North Shields to end the season as double-winners – after dethroning the Techflow Group Northumberland Senior Cup holders with an enthralling 3-2 victory.

A double from Luke Armstrong put a dominant Spartans ahead, but Shields threatened to spoil the party when Dean Holmes lashed home on 85 minutes.

In a real see-saw ending to proceedings at St James’ Park, Ryan Hutchinson put Blyth 3-1 ahead in the final minute, before Gareth Bainbridge’s deflected effort moments later set up a nervy finish. However, Spartans weren’t to be denied their revenge for last season’s 3-4 cup final defeat.

After the weekend’s trophy celebrations, Alun Armstrong made a couple of changes – as Andrew Cartwright took the place of Jordan Watson, which allowed Hutchinson to move back into the heart of defence alongside Nathan Buddle. Meanwhile, Jordan Laidler rekindled his midfield partnership with Sean Reid, with David McTiernan dropping to the bench.

Spartans showed no early signs of a hangover from their Evo-Stik Premier League celebrations – as they registered two good chances within the first two minutes.

Robert Dale broke well and fed Daniel Maguire, who twisted and turned before having his shot blocked away. Moments later, Armstrong fired a fine first-time effort that forced a fine save from Kyle Hayes at the expense of a corner.

That save was nothing compared to what the Shields stopper produced five minutes later – as he pulled off a marvellous double stop. After stopping Reid’s drive from outside the area, Hayes was then called upon to deny Maguire’s follow-up from point-blank range.

Blyth appeared to settle into their surroundings a lot better than their Northern League counterparts – as Dale forced a corner off former Spartan Adam Forster on 11 minutes. The winger then picked out the head of Buddle at the back post, but referee Will Finnie blew for a foul as the defender headed wide.

Another Dale corner three minutes later caused real panic in the Robins’ box – as the ball looped up into the air when Reid’s header bounced off Hayes in the air. Maguire battled well with two defenders to tap in from close range, but the Reds were able to clear the danger after a frantic goalmouth scramble.

Dale was terrorising Shields with his set-pieces in the early going and it was the talismanic winger’s in-swinging free-kick that caused yet more problems on 17 minutes. Reid headed it back across goal at the far post, but Hayes claimed the ball – as Armstrong desperately tried to head it past him.

Reid had his head in his hands just 60 seconds later, when Jarrett Rivers picked him out from yet another corner. The midfielder had a free header in the area, but couldn’t keep it down.

The former West Allotment Celtic man was celebrating soon after though, when he was instrumental in Blyth’s opener on 24 minutes.

Blyth countered well from a rare Shields attack and Reid was able to play in Armstrong at the edge of the area. The Middlesbrough-bound striker was left to finish well past Hayes and assert Spartans’ first half dominance.

Just after the half-hour mark, panic descended on the Shields goalkeeper Hayes – as he opted against taking a hopeful ball forward into his area and picking it up. Under pressure from Maguire, he booted the ball straight into the back of the striker, but his blushes were spared when the ball went wide of goal.

The keeper then failed to cover himself in glory a minute later, when Maguire fed Armstrong just left of goal. The 20-year-old drilled a low shot at goal that Hayes spilled, but he recovered well to gather before Maguire could profit on his error.

Shields finally looked to produce a moment of danger om 42 minutes, when former Spartan Lee Mason broke from a Blyth corner and raced towards goal. Despite having plenty in support, Mason was unable to pick out a teammate at the edge of the area and the chance was gone.

The Robins would come to rue their wastefulness just one minute later – as an intricate passage of play saw the ball end up in the back of their net once more.

Maguire turned well and ran at goal, before picked out the run of his strike partner with a low ball into the box. With the goal at his mercy, Armstrong showed great composure to calmly side-foot the ball between the legs of Hayes for his second of the night.

Shields had to begin well after the restart if they were to overturn their two-goal deficit and they did just that, when Mason picked out Ryan Carr within the first 60 seconds of the second half. Despite having time and space in the area, he couldn’t find the target with his header.

Mason was causing trouble again two minutes later, when he took a short free kick and collected the return ball from former Blyth player Holmes. Mason shot low towards the bottom corner of Paul Woolston’s net, but the on-loan Newcastle United keeper was comfortable in collecting it.

Laidler played a short free-kick of his own down the left on 54 minutes, allowing Dale to have a little run before crossing in towards the near post. However, Shields skipper Kevin Hughes led by example and cleared the danger.

A great ball from Maguire released Dale down the left again four minutes later. The Spartans captain put in a low cross, but Hughes was there once again to thwart his attempts at finding a teammate.

With his move to the Riverside on the horizon, Armstrong was desperate to leave his father’s side with a hat-trick, but he nearly set up a very unconventional third goal for Blyth on the hour mark, when he drove the ball across goal. The ball was met by a Shields body, but went wide when it really could have gone anywhere.

Shields continued to press for a way back into the game and a good passage of play after 64 minutes threaten to produce one. The ball was passed around well in the Blyth box, but Mason scuffed his shot and wasted another very good chance for the Robins.

Dale then found Reid with a free kick from the left wing, but the midfielder’s header cannoned off the back of Hayes and went out behind off the Spartans man.

The Dale-Reid combination threatened to put Blyth out of sight again with 20 minutes to go, when the winger’s corner was met at the front post by the 25-year-old. He beat his marker in the air, but Reid’s header flashed across goal and Shields cleared.

Armstrong looked keen to grab a third on the St James’ Park pitch six minutes later, but his shot clattered off a red body. The youngster reacted quickest to the resulting loose ball, but he lifted his second attempt over the bar.

With time running out for the Techflow Group Northumberland Senior Cup to reclaim their crown, Michael McKeown had a golden chance to set up a nervy finish for Spartans. However, the substitute fired wide from a tight angle when he really should have tested Woolston.

McKeown then fancied his chances with a 20-yard free kick. He managed to beat the wall, but the ball was hit straight at the body of Woolston.

A majestic run from Maguire nearly ended in embarrassing fashion for Stuart Dowson – after the striker played the ball across goal and the right-back got a touch on it. With Hayes on the floor, he felt a massive sense of relief when the ball sailed just wide of the post.

Rivers then fired well first-time on 83 minutes, but Hayes saved well with his feet to deny the winger a goal at the home of the newly promoted Magpies.

Shields broke two minutes later and finally clawed their way back into the game, to give their fans something to cheer about. Gareth Bainbridge held the ball up six yards out, before Holmes caught Woolston cold and smashed one into the Spartans net.

The Robins’ joy was short-lived, however, when Spartans scored their third on 90 minutes. Rivers picked out the near post run of Hutchinson, who nipped in and put the ball past Hayes.

Neither side had time to draw breath before the Reds pulled another goal back in the first minute of stoppage time – as Bainbridge put his side back in contention through a deflected effort.

In spite of the late drama at both ends, Blyth were able to see out a nervy final few moments – as they claimed an impressive league and cup double, to set the club up well for next season.