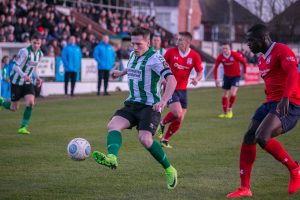 Goals from Michael Liddle, Sean Reid and Dan Maguire helped 10-man Spartans to their first home win of 2019 in a ruthless display at Croft Park.

Robbie Dale provided both goals five minutes either side of half time, first by playing in Liddle to slot home from close range, and then crossing for Reid to power home a back post header.

Despite having Louis Laing sent off for a high tackle on 76 minutes, Spartans completed the scoring three minutes later as Maguire latched onto an error by Boston goalkeeper George Willis.

Alun Armstrong made two changes to the Spartans side that beat Curzon Ashton on Monday, with Alex Nicholson and Robbie Dale replacing Lewis Horner and Jamie Holmes in the starting line-up.

After a quiet opening, the game sprung to life after 20 minutes as Ryan Qualter found himself unmarked in the box following a Ben Davies free kick, but the centre back failed to sort out his feet with the goal gaping.

This chance for the visitors seemed to jolt Spartans into life as two minutes later Maguire pounced on a defensive lapse and fired wide. Then after 28 minutes an unmarked Kieran Green wasted a glorious chance as he headed wide, before Dale completed the flurry with a well struck free kick that was tipped wide two minutes later.

Spartans finally broke the deadlock five minutes before the break when Dale, cutting inside from the right wing slipped through a glorious pass to Liddle who struck a composed finish inside the near post.

The hosts started the second period as they ended the first, and struck again within five minutes, as Dale twisted and turned the Boston right back before hoisting a deep cross that was met with a towering header by Reid.

Boston almost responded within three minutes through Andi Thanoj, his cross-cum-shot flashed across the Spartans goal but somehow none of the onrushing attackers managed to get a touch.

But other than that the visitors rarely threatened, and while Laing’s sending off looked to set up a tense finale, nerves were settled for the home side three minutes later.

Maguire got his reward as he pressed Cresswell into a rushed back pass that his keeper failed to control, the Spartans striker latched onto the ball and curled home from the edge of the box to round off a comprehensive win.

The results sees Spartans move up to 10th in the National League North, five points behind seventh place Telford, with their faint play-off hopes very much alive.