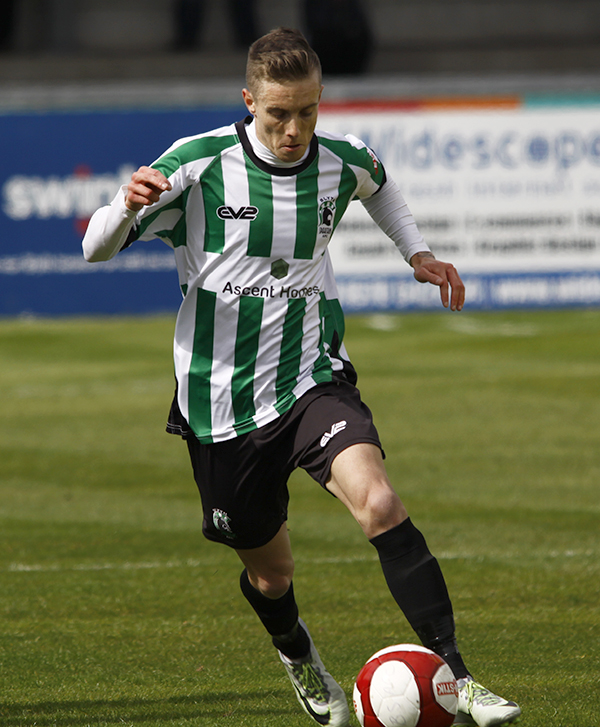 Blyth played their first pre-season friendly at Croft Park as they welcomed Carlisle United. The Cumbrians ultimately left with a 3-0 victory but it was a score that flattered them.

Carlisle took the initiative from the first whistle and created the first opportunity on 4 minutes. A ball from midfield was played through to the trialist striker who forced the ‘keeper into touching the ball behind for a corner.

From the resultant corner, the ball came to Joyce who clipped the ball towards the top corner but the ball drifted wide and high of the corner of bar and post.

It was from this moment on that Blyth took the game by the scruff of the neck and dominated possession and territory. Jarrett Rivers was the main danger for the Spartans and on 7 minutes it was his jinking run down the right that created the first half chance. His ball was crossed into the box but just evaded the run of Sean Reid as he looked to nod in.

Robbie Dale was tormenting the opposite fullback and sent a delicious ball that Dan Maguire controlled and twisted before forcing the on trial goalkeeper into a save.

On 23 minutes, the Blyth ‘keeper sent a long ball down field which Magurie trapped perfectly and laid the ball back to Dale who curled his effort narrowly off target.

Sean Reid was next to try his luck as a bit of good fortune saw the ball drop to his feet. He turned and ran at the defence but his effort lacked the power to really trouble the ‘keeper.

Five minutes before the interval Robbie Dale produced a piece of mesmerising skill that left the fullback on the floor before firing in an effort that looked destined for the top corner until it took an unfortunate deflection off Rivers.

As the half drew to a close, Spartans had two good chances to take the lead. First, Robbie Dale collected the ball and cut inside and managed to fire off a shot that forced the ‘keeper into a smart low save. As we entered 1st half stoppage time, Rivers received the ball from Maguire but his effort was curled over the bar without troubling the goalkeeper.

Carlisle started the second half having had a flea in their ear from Keith Curle. Devitt played a glorious ball over the top and Miller having arrived as a half time substitute scooped the ball over when presented with a glorious opportunity.

On 50 minutes, Carlisle had another fantastic opportunity when the ball made its way to their striker who eager to make an impression shot from a tight angle but only hit the side netting.

The sustained pressure continued as Jones drove forward and let fly from the edge of the box but the effort was miscued and it trickled wide.

Shaun Miller was a thorn in the Spartans side and had three great opportunities to open the scoring. Firstly, a glancing header flew wide as he met a cross. Next, he brought down a raking ball from Devitt and tried to lob the ‘keeper but he did fantastically well to get fingertips to the ball and keep it out. Finally, a free kick found Miller at the back post but the ‘keeper spread himself and kept the ball out.

Dan Maguire got his first sniff of the second half as Mullen intercepted a loose ball in the midfield and released Maguire who created space to bend an effort that narrowly missed the bottom corner.

Jarrett Rivers had a golden opportunity to put Spartans into the lead as he placed an effort wide of the far post after a pull back from Dale.

That miss was to prove costly when on 78 minutes, a trialist broke down the left for Carlisle and he was able to cut the ball back to Hallam Hope who fired into the roof of the net from 14 yards out.

Minutes later and the lead was doubled as the Hope turned provider. He played a cross in from the right side and whilst a trialist in defence was able to half clear the ball, it fell to Gary Liddle who fired in past the ‘keeper.

Another 2 minutes later and it was 3-0. A ball down the side of the defence allowed a trialist to get into the box and he slotted the ball home to add gloss to the scoreline.

The chances weren’t finished there and Rivers could have reduced the arrears. A long ball over the top released Rivers and as the ‘keeper advanced, he was able to gather the attempted chip from the edge of the box.

The final score flattered the visitors and on another occasion they may have found themselves a goal or down behind after Spartans created several good opportunites.

The Spartans play host to another league side when a Sunderland XI come to Croft Park on Tuesday evening with a 7.30pm kick off.