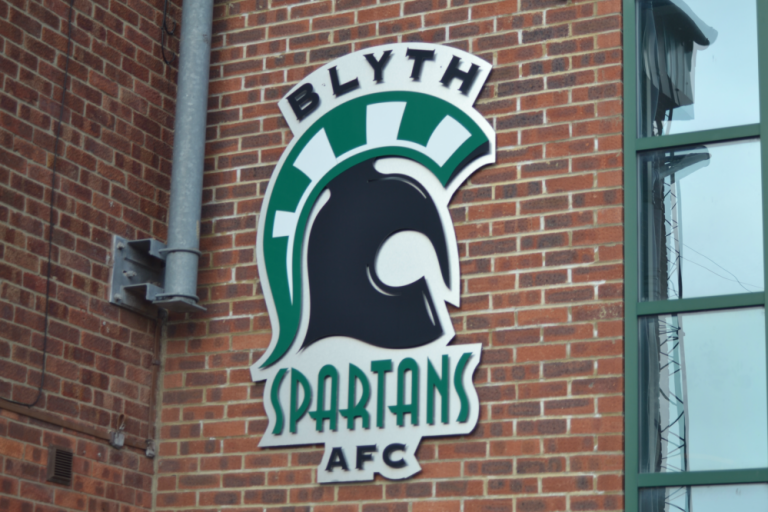 Blyth Spartans fell to their second home league defeat of the season in a disappointing 1-0 reverse at the hands of North Ferriby United.

Akeel Francis’ 62nd minute winner from a Joe Pugh’s cross was the decisive moment in a cagey game.

Spartans should have had a penalty in the dying embers of the game when Adam Wrightson was pushed over in the penalty area – but came away with nothing from this Vanarama National League North tie.

The first opportunity of the game fell to Robbie Dale when he was allowed to run at the North Ferriby defence from deep on the left – his final effort however – sailed wide of the mark.

Two minutes later, the visitors were awarded a free-kick 20-yards from goal – dead centre. Captain Steve Brogan stepped up and curled an effort left footed around the Spartans wall – destined for the bottom left hand corner – Jameson diving at full stretch to tip the effort around the post.

With 13 minutes played, Spartans went close through the energetic Maguire. Dale picked up the ball on the left wing before laying the ball off to Maguire who had found space in the penalty area. He turned goalward, hitting a low cross towards the bottom right hand corner – turned behind by the desperate dive of a North Ferriby defender.

With twenty minutes played, Spartans almost took the lead in bizarre fashion. An innocuous cross from Hutchinson almost caught Ross Durrant in the North Ferriby goal off his line, the ‘keeper flapping the effort away – Michael Liddle unable to convert the rebound at the back post.

With the game reaching the half hour mark, Blyth looked to assert some sort of dominance on proceedings. After Rivers won back possession deep in North Ferriby territory, he found Hopson on the edge of the area. The midfielder stroked the ball with the inside of his foot 22-yards out, curling an effort into the side-netting – the Port of Blyth Stand up on its feet thinking Spartans had taken the lead.

A minute later Maguire was in positions to put the hosts ahead. After some neat interplay between himself and Rivers, the latter rolled the ball towards Spartans talismanic striker – only to see Bobby Johnson steal in and turn the ball behind.

From the resulting corner, the ball fell to the feet of Jordan Watson who spun and hit an effort towards the top right hand corner – Durrant’s finger tips denying the game an unlikely opener.

On the stroke of half time, the visitors should arguably have taken the lead. Francis got on the end of a right wing set piece, but instead of heading goalward unmarked, he guided his header parallel to six yard box and wide.

Seconds later, a throw in caused the Spartans backline problems, Joel Ambalu’s quick feet saw him glide past three Blyth defenders before crossing towards the back post, Buddle on hand to clear on the goal line, leaving the score at the break 0-0.

Five minutes into the second period, a miscommunication between Liddle and Jameson allowed the visitors a corner. The right wing set-piece floated towards the edge of the area where Jake Picton half volleyed a stinging effort off a Spartans defender and behind for a corner.

Three minutes later, the visitors had a golden chance to take the lead. Francis broke the offside trap with ease, leaving him one-on-one with Jameson, blazing over when he should have hit the target.

Within 60 seconds, Spartans created their own clear-cut chance, Maguire playing in Rivers down the right, his lofted cross falling kindly for Horner who mishit his effort wide. Within the next minute, both Hutchinson and Horner again had efforts blocked by desperate Villagers’ defending.

In the 57th minute Spartans were awarded a free-kick on the left wing. Hopson whipped in an effort towards the bottom right hand corner, Durrant at full stretch tipping the ball behind the post.

Within a minute, Dale almost fashioned the opener from nothing, his mazy run from the left opened up enough space for him to take aim, hitting an effort just wide of the far post from the left hand side.

Against the run of play, North Ferriby took the lead just after the hour mark. Joe Pugh was allowed space on the right wing to advance with the ball at his feet. He reached the 18-yard box before hitting a pinpoint perfect cross into the path of Francis who steered the ball in from six yards.

On 66 minutes, the Villagers’ should have been two goals to the good. Pugh breached the offside trap and was left one-on-one with Jameson, he fired over from 20 yards out.

With the game entering the final quarter of an hour, Maguire picked up the ball on the edge of the area and hit an effort just over Durrant’s crossbar. A minute later, the visitors earned a corner. Johnson’s set piece from the right was met by the head of centre-back Jake Picton, straight down the throat of Jameson.

With nine minutes remaining, Spartans were denied a penalty by referee Martin Woods when Jordan Cooke bundled into the back of substitute Adam Wrightson right in front of the official. Woods waved play on – to the dismay of the Spartans fans in the Commissioners Quay Inn Stand behind the goal.

Spartans tried to push forward in the final 10 minutes, but struggled to create any noteworthy opportunities. The next chance – in fact – fell to the visitors, Simon Russell taking aim from the edge of the area – his effort straight at Jameson.

Substitute Macaulay Langstaff almost saved the day in injury time – his skilful run from the left flank saw him clip across towards Sean Reid – but there was just too much height on the cross.

The visitors pick up their first goal and win of the Vanarama National League North campaign, while Spartans look ahead to their trip to Curzon Ashton next Saturday to bounce back from a disappointing afternoon.