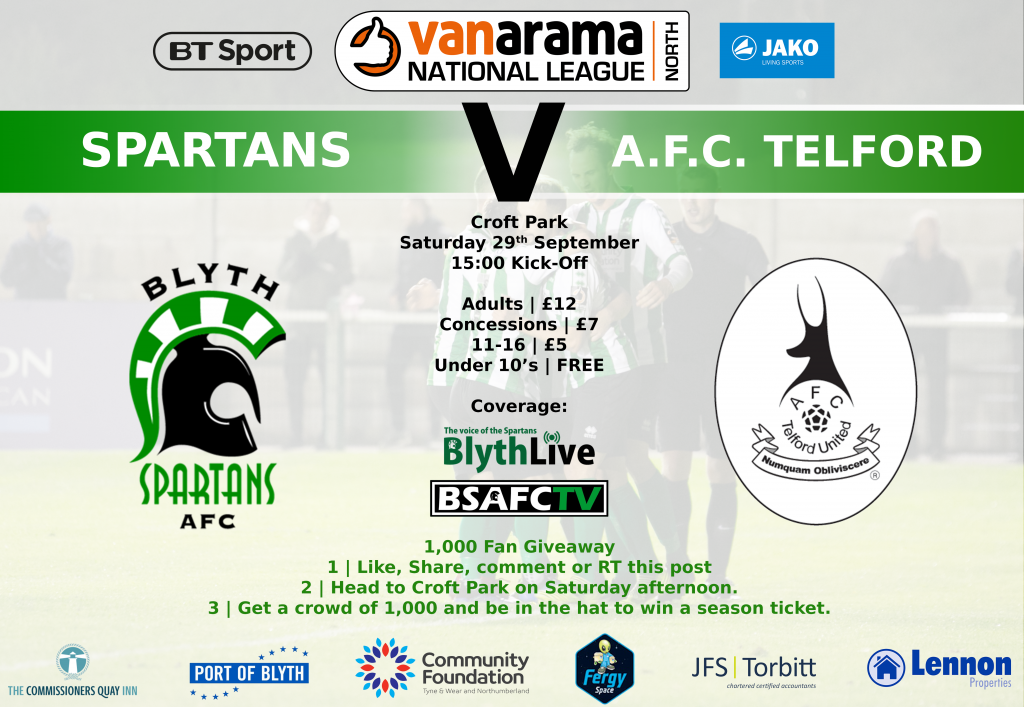 Spartans will be looking to kick-start their Vanarama National League North campaign off the back of Tuesday night’s FA Cup victory over Nantwich Town – which included the sides first clean sheet since a 2-0 win over Southport last season.

We welcome A.F.C. Telford United to Croft Park this weekend – who’ll be looking to replicate their performance here in April last year when they took all three points back down south in a 1-0 win. Marcus Dinanga scoring a 26th minute winner – who’s currently on loan a fellow North East side Hartlepool United.

A.F.C Telford United currently sit 3rd in the Vanarama National League North with 5 wins from 10. The Bucks have lost just one game in the league this season – which came in a 3-0 reverse at Darlington, the last time they ventured away from New Bucks Head.

Despite their lofty position, they’ve won just once in their last four games and have only one victory away from home in the league – a 3-2 win over Spennymoor Town. In contrast they have won four our of five games at their home ground, and like Spartans have qualified for the third qualifying round of the FA Cup, facing an away trip to Warrington Town next Saturday.

Blyth Spartans have played AFC Telford United 16 times since 2005, winning on six occasions, losing five times and drawing five time – so honours have been pretty even over the years.

At Croft Park the sides have faced off eight times, Spartans winning four, the visitors twice and their has been two stalemates. Last season the clubs met twice at the home of Spartans – both teams taking a 1-0 victory, Blyth’s coming in the FA Trophy.

An interesting titbit is that Spartans have conceded just one goal in their last six home fixtures against the Bucks, Marcus Dinanga’s strike was the first goal scored by this weekend’s visitors since December 2007.

Robert Dale is the only current player to have scored in a home game against AFC Telford, scoring in a 2-0 win back in March 2009. He’s scored on four separate occasions against today’s visitors.

Born in Germany but Essex-raised, Cowan began his career in non-league football with Braintree Town, then Canvey Island.

A loan spell at Nuneaton Town saw him catch the eye of Shrewsbury Town, with whom he signed professionally in March 2005. Unable to fully establish himself, Cowan spent time on loan at various clubs before settling at Nuneaton Borough following his release from the Shropshire club.

He signed for AFC Telford United in 2008, where he made close to 100 appearances. Moving on to Fleetwood Town in 2010, he then spent time with Gainsborough Trinity, Nuneaton Town and Solihull Moors before moving into coaching.

He returned to the New Buck’s Head in 2016, before taking on the management position following the resignation of Rob Edwards in May 2018. Away from football, he runs his own coaching and sports development company.

Prolific striker Daniel Udoh has been in fantastic form this season, finding the back of the net nine times – those goals coming in four game. He’s netted three braces and a hat-trick in games this campaign – if he scores once, he has always scored a second this season.

Born in Lagos, Nigeria, Daniel moved to the UK with his family aged 9 and in his teens signed to Luton Town’s development squad, before accepting a two-year scholarship offer at Stevenage. He joined Kidderminster Harriers on non-contract terms in 2014, and had several loan spells before joining Ilkeston in 2015.

His goalscoring brought him to the attention of Crewe Alexandra, and they paid an undisclosed fee to sign him and he soon made his debut, scoring his first senior goal on his 19th birthday. Further loan spells followed through 2017/18, and he ended the season with Leamington, scoring 9 times for the Brakes. Released by Crewe at the end of the season, the Bucks beat competition from several sides to capture his signature in June 2018.

Nathan Buddle will hopefully be celebrating this weekend with a win and a clean sheet on his 25th birthday.

Meanwhile Jarrett Rivers is one goal shy of 30 for Spartans, should he recover from injury.