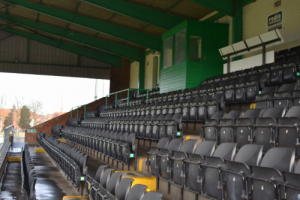 Blyth will look to extend their lead at the top of the Evo-Stik Premier Division when they travel to Cheshire on Tuesday evening to face their nearest challengers Nantwich Town. Blyth ran out comfortable winners earlier in the season when Robbie Dale and Stephen Turnbull both scored free-kicks to record a 2-0 success.

On Saturday, Blyth dispatched Skelmersdale with the minimum of fuss as a brace from Daniel Maguire and efforts from Luke Armstrong and Jordan Watson sealing a comfortable 4-0 success.

Our hosts saw off a spirited performance from Ilkeston on Saturday as they secured 3 valuable points with a 3-2 win. The result extended the Dabbers’ unbeaten run to 13 games.

Phil Parkinson – As a junior he represented Crewe Alexandra and Reading. Appointed manager of the Dabbers in February 2015.

DANGER MAN Sean Cooke – The leading scorer for Nantwich this season with 17 league goals from midfield. Formerly a youth player with Crewe Alexandra, he has also appeared for AFC Fylde, Telford and FC United.