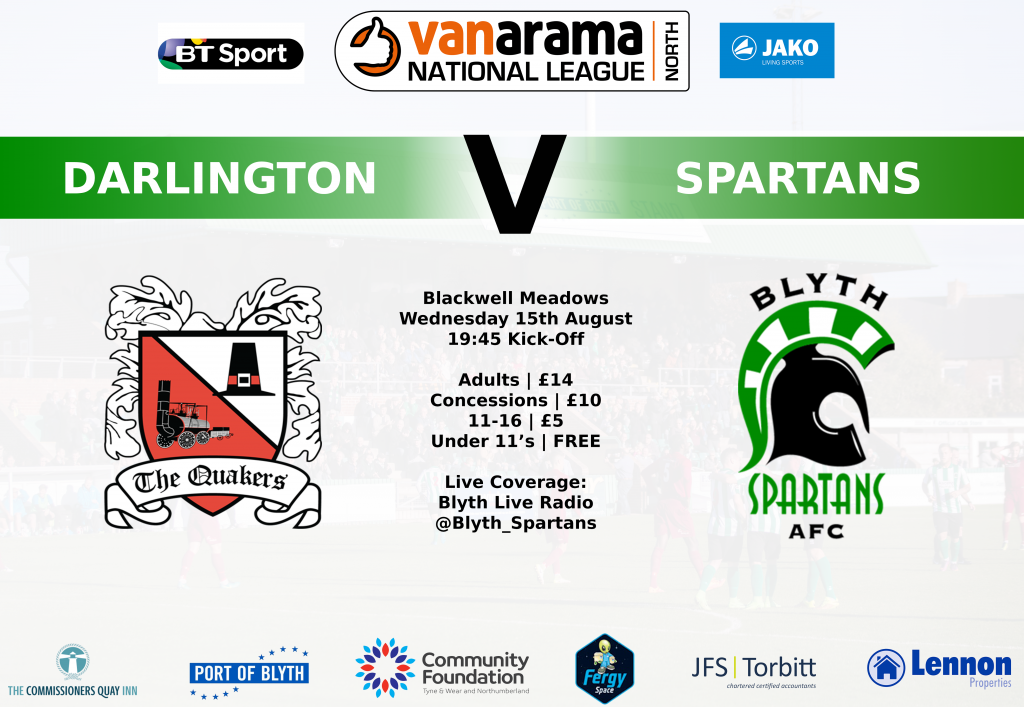 The Midweek fixture this week sees Alun Armstrong and the lads travel away to Blackwell Meadows to face fellow North Easterners Darlington.

Darlington, who Like Blyth achieved their first win of the season last week- against Brackley Town, will be hoping to improve upon their relatively disappointing finish of 12th place last season. Spartans however, buoyed by their fantastic result this weekend, will travel away hoping to continue their goal scoring prowess against a Darlo team void of a clean sheet so far this season.

Founded in 1883, Darlington for much of the 20th century occupied positions between the old third and fourth divisions;  acting as a founding member of both the northern section of the Third Division and the old Forth Division upon their inceptions in 1920 and 1958 respectfully.

Their peak domestically arguably came in 1926 when the Quakers finished 15th in the then second division- their highest domestic finish to date, although a number of decent cup runs has seen Darlington reach the last 16 of FA Cup on two occasions.

By the 1970s Darlington’s form on the pitch began to tail off, and they were forced to reapply to the league on five separate occasions during the decade. Unsurprisingly, matters of the pitch also began to worsen; this coming to a peak in 1982 when financial crisis was only narrowly averted thanks largely down to the fundraising efforts of the clubs supporters. Despite this, and the excellent coaching of Cyril Knowles- who saw the team reach the third division once again, Darlo soon found themselves at the foot of the football league table and were relegated to the Conference at the end of the 1988/89 season.

Darlington were promoted the season thereafter back to the forth division where they remained for much of the 1990s and early 2000s- all for a brief spell back in the third division during 1990/91 season. This period of the clubs history is one of contrast between the relative successes on the field- as the club finished consistently in the top half of the then League Two, and abject failures of the field- note the series of financial meltdowns which saw the club fall into administration in 2003 and 2009.

In May 2012 the FA expelled them from the football league following credit issues, and due to a lack of required grading, Darlington – known as Darlington 1883, found themselves in the Northern League Division One, the ninth tier of English football.

Since then matters at Blackwell Meadows- the Quakers home ground since 2013, have been significantly more positive. Three promotions in four seasons saw Darlington FC- the original name they reverted back to in 2017; quickly ascend back to the National League North for the 2016/17 season.  Although this sharp rise through the leagues has tailed of over the last two seasons, Darlington’s fans; who along with the local community own 100% of the club, continue to expect big things from their local team, with promotion once again surely being on the minds of many in and around the club.

A former striker- enjoying his best professional spell at Darlington, Young manager Tommy Wright is beginning his first full season at the club following his appointment last October after the departure of the long standing a hugely successful Martin Gray- the man who led Darlos rise back to the National League North.

After a less than impressive first season with the club Wright will be looking to improve upon a string on mid table finishes in the league;  both with Darlington last season and Nuneaton Town the season before that.

As already mentioned Darlington are yet to keep a clean sheet this season with their strikers very much being the reason for their league successes so far. The most impressive man going forward for the Quakers this season has been Gibraltar international Reece Styche; the scorer of a 23 minute hat-trick last week away to Brackley Town.

Styche- who also netted against Spennymoor in the league last Tuesday, has played most of his football for Forest Green Rovers, scoring 35 goals in 108 appearances for the club-including finishing as top goal scorer during the 2010/2011 season, in what can be described as a stop start stint at the club hampered by a number of injuries.

Since then Styche has plied his trade at a number of National League clubs including Tamworth and Gateshead were he has continued to routinely find the net. Averaging more than a goal every two games since joining the Quakers in November 2017, the Spartans will be hoping he has left his shooting boots in Brackley for their fixture this Wednesday evening.

The list could be endless really, a large number of the Blyth Spartans squad have represented Darlington on occasion, and many players have played for both sides through the club’s histories.