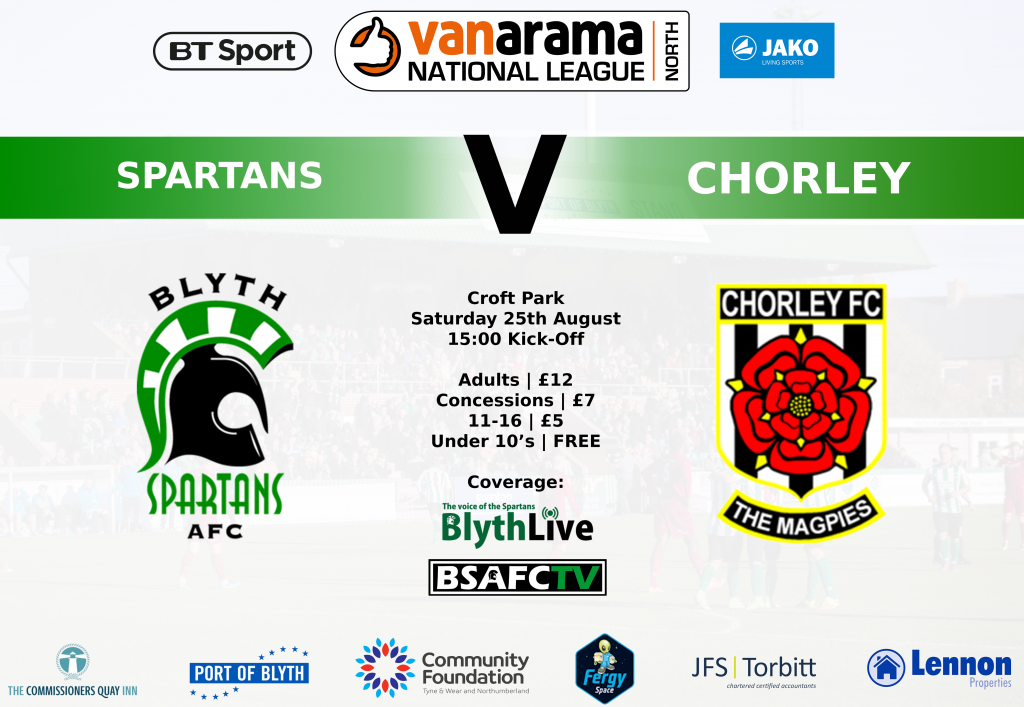 This weekend presents the Spartans with their toughest test so far this season as they welcome the undefeated league leaders Chorley to Croft Park.

The visitors, on the back of five impressive results this season, will present the Spartans with a serious challenge as they hope to continue their perfect start to the season. Going forward young striker Alex Newby has already produced some notable performances this term, while defensively the Magpies are yet to concede at all in the league.

Despite this, and some significant injury concerns, Alun Armstrong will be hoping his team can rediscover some of the excellent form they showed at home against Chester a fortnight ago – this being a similar opportunity for Blyth to challenge one of the early league favourites.

Founded in 1883- despite existing for 6 years prior as a rugby club, Chorley began their footballing life in 1889 competing in the Lancashire Junior Division. A year later the Magpies joined the Lancashire Alliance League, a competition they were crowned champions of in 1893 as well as runners up in 1894.

Following this dominance in the Alliance League, Chorley once again moved on to a new challenge, the Lancashire League, which they joined at the start of the 1894 season. Two league championships before the turn of the century led to applications from the Lancashire outfit, albeit unsuccessfully, for entry into the Football League in 1899.

Chorley instead took their place in the newly assembled Lancashire Combination League, competing in the Combination B division- a league they remained in for the next 68 years, winning a total of 11 times.

The 1920s proved a significant one for Chorley as they consistently finished highly in the Combination League. This period also saw the Magpies find their home roost at Victory Park where they have remained for the last 99 years.

Finally in 1982 Chorley opted to partake consistently in the Northern Premier League, a decision they were rewarded for in 1988 when the Magpies gained promotion to the then Vauxhall Conference- the fifth tier of the Football League pyramid.

The 2010/11 season saw Chorley return to the Northern Premier League; and after a pair of decent finishes, Chorley, on their third attempt were promoted back into the National League North for the start of the 2013/14 season. In the 4 seasons since their return to the sixth tier Chorley have consistently competed at the top of the league table – finishing in the playoffs 3 times. Consequently it would be no shock to see the Magpies challenge for promotion again this season as they look for a return, after some twenty years, back to the National League.

New to his role, manager Jamie Vermiglio takes over from his mentor Matt Jansen, who following a successful stint at the club, stepped down at the end of last season.

Despite this being Vermiglio’s first senior management role, the former Chorley player and club captain doesn’t enter the role unprepared; having served for three and a half seasons under Jansen as part of his coaching staff.

An undefeated competitive record certainly suggests that the young manager isn’t struggling to step out of the shadow of his former gaffer and begin forging his new career the sphere of professional football management.

The man who encapsulates Chorley success both going forward and in defence this season is left back Adam Blakeman.

Alongside excellent performances in defence- as part of an impressive back five, Blakeman has also managed to get forward on numerous occasions so far this season; bolstering the Magpies attack and scoring on three separate occasions – including an impressive 25-yard strike against York City.

A graduate of the Bolton Wanders academy, the twenty-six year old has already gained substantial experience, playing over sixty times for Hyde in the National League, as well as shorter stints at then National League side Southport and in Scotland with third tier Ayr.