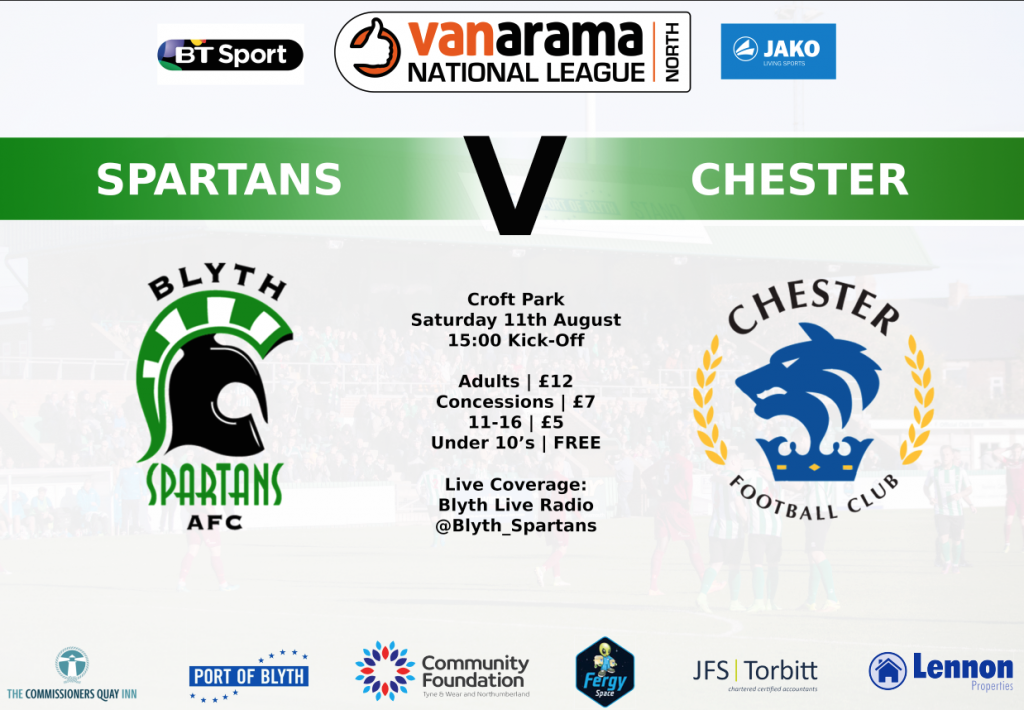 This weekend we welcome Chester to Croft Park in what stands to be the visitor’s longest trip away from home in the Vanarama North this season.

This proves to be another tough test for Alun Armstrong and his men- yet to score a point this season, against a freshly relegated Chester who instead are looking to extend their unbeaten start to the season.

Founded in May 2010, Chester FC was founded from the ashes of the Chester City- most famous perhaps for being the club at which Liverpool legend Ian Rush began his career.

Beginning their life in the Evo-Stik Division 1 North, the forth tier of the National League system, Chester FC wasted little time returning to the National League. A series of successive promotions meant that by the 2013/14 season ‘The Blues’ had reached the same position their predecessor Chester city had been stripped of only three years prior.

With an impressive opening set of results, including a 3-0 away victory at Curzon Ashton, it is likely Chester will feature at the top of the league this season as they undoubtedly aim for an immediate return to the National League.

Both experienced managers and winners within the National League system, Morley and Johnson have openly declared their ambition to lead Chester to the playoffs this time out- with this being far from a season of consolidation.

This new challenge that Chester presents the pair; devoid of the cash that may have enabled some of their successes at Salford, will be an interesting one for the rest of the league to witness- although early results suggest Morley and Johnson have adapted well to their new settings at Deva Stadium.

Following his former gaffers Morley and Johnson from Salford, new loan singing Anthony Dudley has looked lively already this season, grabbing a goal away to Curzon Ashton on Monday, as well as netting against Everton’s under 23’s in pre-season.

Forty appearances for Salford last season- finishing as they join top goal scorer, along with previous stints in the National League with Guiseley and Macclesfield, the 21 year old forward is an experienced and dangerous prospect for Spartans this weekend.

Expect to see the young forward feature highly on Saturday as well as throughout the season for Chester as he looks to further establish himself as a rising talent within the National League system.

Former Spartans midfielder Jordan Laidler was sent out on loan in 2013 by Sunderland to Chester.

Defender Aaron Cunningham has completed his suspension from his red card with Hartlepool United for the first time, Sunderland loanee Sam Brotherton is also in contention to make a home debut. Long-term absentee Ryan Hutchinson will miss out, as will Jordan Watson who has gone out on loan with EBAC Northern League side Sunderland RCA.