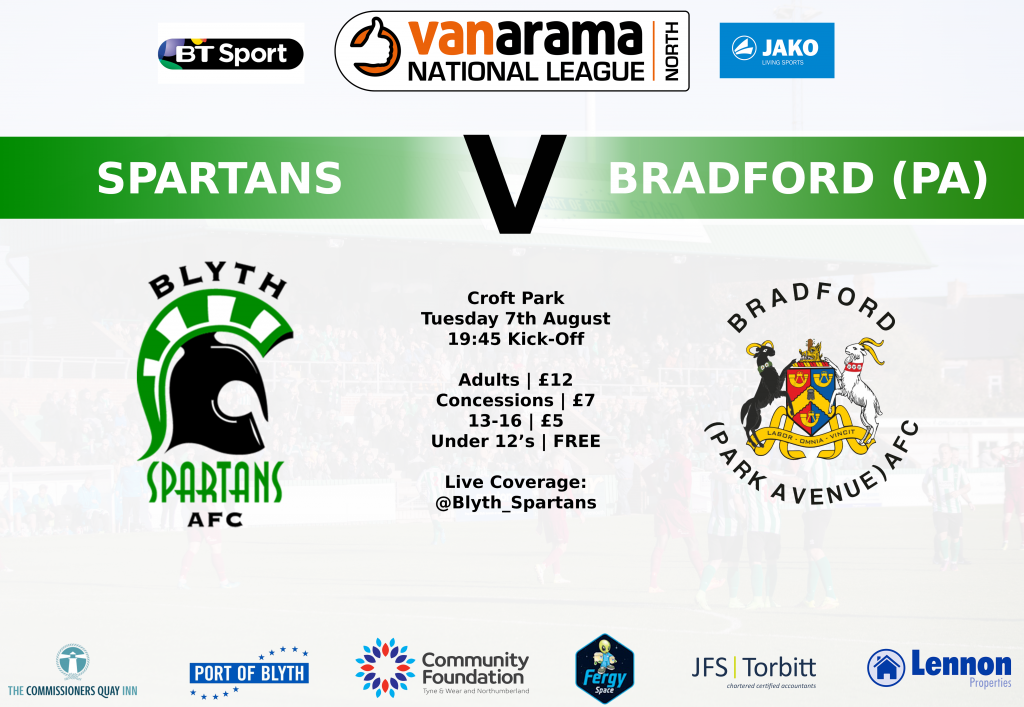 The visitors opened the season with a very creditable 1-0 home win against FA Trophy winners Brackley Town – also the team that knocked them out of the play-off last season.

Meanwhile, Spartans suffered a 3-0 defeat at the hands of newly promoted Hereford in our longest away trip of the league season.

The present club is a reincarnation of the club which played in the Football League from 1908 to 1970 before dropping to the Northern Premier League and going into liquidation in 1974. The new entity plays its home matches at the 3,500-capacity Horsfall Athletics Stadium.

Bradford are one of 35 clubs to compete in all four top tiers of English football. The new club started life at what was then the thirteenth tier: Division Three of the West Riding County Amateur League.

Last season the visitors today beat Alun Armstrong’s side at the Horsfall Stadium before Spartans got their revenge later in the season with a 3-0 home win. After a seventh placed finish last season the Avenue will be eager to push on and secure promotion this time out.

Manager Mark Bower started his managerial career off at fellow National League North side Guiseley – spending four years at the club before making the switch to the Horsfall Stadium.

He led Avenue to seventh last season and a play-off semi-final. His playing career spanned 16 seasons, the majority at Bradford City where he made 231 appearances.

Beesley who is the son of ex Sheffield United and Leeds United center back Paul Beesley, joined Salford in June 2017 and made 23 appearances last season before going on loan to fellow National League North side Boston United. Beesley has spent most of his career at Chesterfield where he made his league debut in November 2016 against Fleetwood Town.

Michael Liddle will make his 75th appearance for Blyth Spartans if selected this evening.