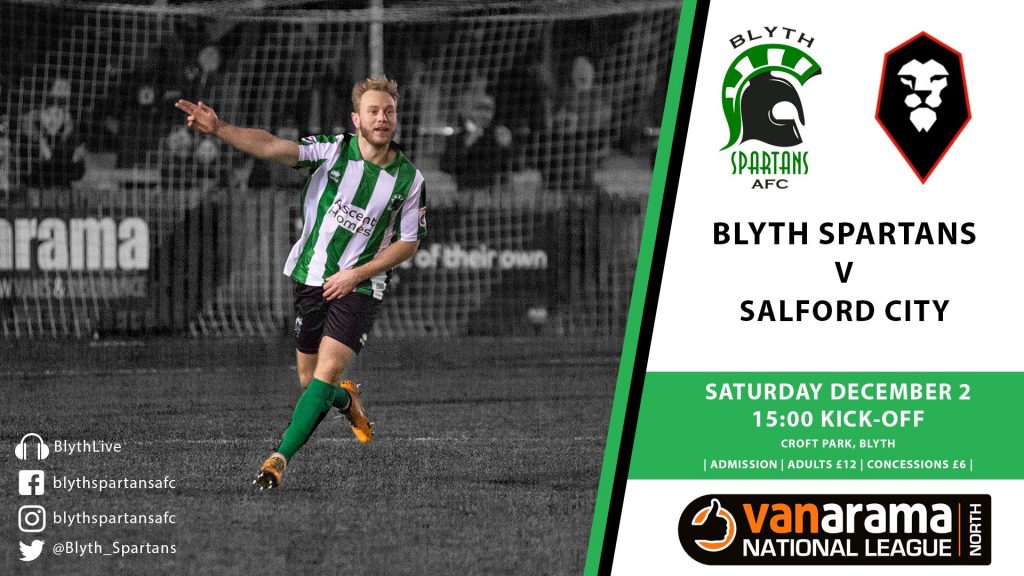 Blyth Spartans play host to league leaders Salford City in a highly anticipated clash on Saturday. Blyth are joint highest scorers in the league this season whilst Salford have the meanest defence which should add to the spectacle. Salford are riding high at the top of the table and will be hoping to remain there, come the end of the season.

The Spartans came from behind to triumph against Stalybridge Celtic a week ago. Blyth fell behind when Connor Hughes broke forward and had a huge slice of luck in the box to slot into an empty net. However, Spartans levelled when Sean Reid flicked a header home before Ian Watson rifled in an unstoppable 25yd effort into the top corner to win the game.

Salford were also in FA Trophy action but were on the wrong end a 4-0 defeat at Brackley Town. Aaron Williams scored a hat trick inside an hour at St James’ Park to put Brackley firmly in control before Glenn Walker scored in the 90th minute to add some more gloss to the scoreline.

Blyth are also unbeaten in all their meetings with Salford with two 2-1 victories coming at Croft Park.

Mike Phenix – The frontman was top scorer for Salford last season as he banged in 16 goals. Earlier in his career, his form for AFC Telford saw Barnsley pay £25,000 for his services before a spell at Macclesfield Town on loan and Southport.