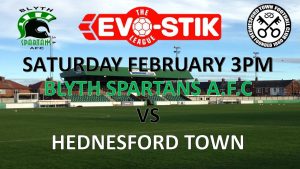 Blyth will look to continue their fine start to 2017 with victory over visitors Hednesford Town. Spartans won 2-1 at Keys Park earlier in the season with goals coming from Sean Reid and Luke Armstrong.

Blyth recorded an 8th successive win at Warrington on Tuesday evening. Goals from Dan Maguire and Luke Armstrong sealed a comfortable victory against the Yellows. Hednesford saw their game in midweek called off.

Hednesford drew 1-1 in their most recent game at home to Barwell on Saturday. The Pitmen currently sit in 12th position in the Evo-Stik League which will be seen as disappointing amongst supporters as they look to bounce back into the National League North.

Blyth will have to make one enforced change for the game with the Stephen Turnbull now left for the high seas.

Hednesford are currently without a manager following the decision from Paul Casey to step down from the role on Tuesday morning.

Ashley Sammons – Joined Hednesford in May 2016 and leads the goalscoring charts with 8 goals in 29 appearance this season.