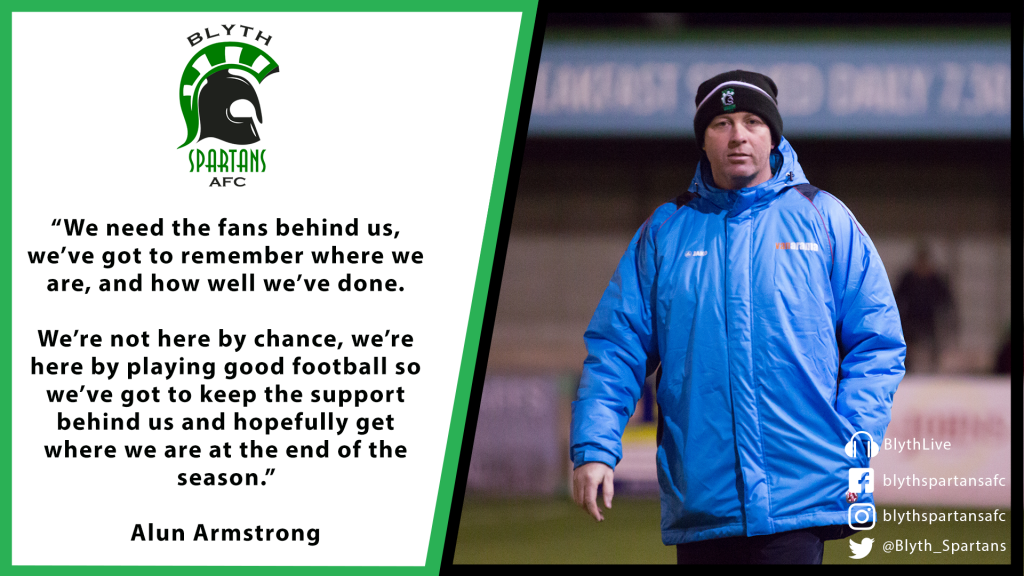 “We need the fans behind us” is the call from Blyth Spartans manager Alun Armstrong ahead of Saturday’s trip to Boston United.

However, despite the slight dip in form, Armstrong’s men still occupy the final playoff spot – holding a four-point advantage over Bradford Park Avenue and Chorley, who sit just outside the top seven.

Armstrong, speaking to BSAFCTV after the midweek defeat, asked supporters to remember “where we are” ahead of the journey to The Jakemans Stadium.

“We got to go away to Boston – which is going to be another tough game. I’d imagine it’ll be very similar to Tuesday and we’ll have to try and break them down,” said the former Middlesbrough striker.

“It’s going to be really tough but I’ll get the lads in on Thursday – try and get their spirits up, and get them playing the confident football we’re used to playing.

“We need the fans behind us, we’ve got to remember where we are, and how well we’ve done. We’re not here by chance, we’re here by playing good football so we’ve got to keep the support behind us and hopefully get where we are at the end of the season.”

And Armstrong has called for his players to get back to their creative selves – hopefully beginning at Boston tomorrow afternoon.

He said: “We’ve got to get back to what we used to do – getting back to stretching teams and then play the football. I don’t think the last two games we’ve earned the right to play – we’ve just played football and never really had an end product.

“Tonight [on Tuesday] I can’t really remember any chances where we looked like we were going to score – that’s not us at all. It’s so disappointing, so frustrating but we have to move on and learn from it quickly.”