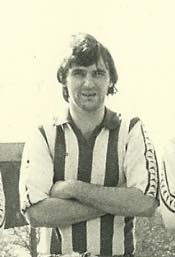 Blyth Spartans are saddened to hear of the passing of legendary former striker Les Mutrie.

The Spartans hall of famer – who scored 58 goals in  86 appearances for the club – had fought a long battle with oesophageal cancer, but his family released a statement revealing his sad passing at 66 years of age earlier today.

Mutrie arrived at Croft Park from Gateshead United in March 1979 and gave the Blyth fans a sign of what was to come when he scored on his debut, to earn a 1-1 draw against Bishop Auckland. The former Ashington and Carlisle United striker’s flamboyant goal-scoring style endeared him to them further still – as his goals helped the club to secure the Northern League Cup in 1978/79 and the Northern League title 12 months later.

His form also saw him become the first Spartan to represent the England semi-professional side, which earned him the accolade of being the first Northern League player to represent his country at that level as well.

After three epic FA Cup clashes with Hull City during December 1980 – which saw Mutrie score in the deciding 1-2 defeat to the Tigers at Elland Road – the much idolised centre-forward impressed Hull manager Mike Smith enough for him to move to Boothferry Park for £30,000, which was a record fee paid by a Football League club for a Non-League player at the time.

“Sir Les” – as the Hull fans would affectionately call him – was a popular figure for the Yorkshire club and helped them out of Division Four in 1982/83, but he is best remembered for his goal-scoring exploits the season before. He found the back of the net in nine consecutive games, earning himself a place in the Hull City record books with a goal-scoring run that still stands to this day.

Mutrie then went on to play for Doncaster Rovers, Colchester United and Hartlepool United, before he was forced to retire from the game through injury.

A minute’s applause will take place prior to Saturday’s Vanarama National League North clash with Nuneaton Town on Saturday to honour his memory and thank him for everything he did in a Spartans shirt. Blyth Spartans would also like to pass on our condolences to Les’ family and friends.

An idol to many at Croft Park and a prolific goalscorer for the club. Rest in peace Les.