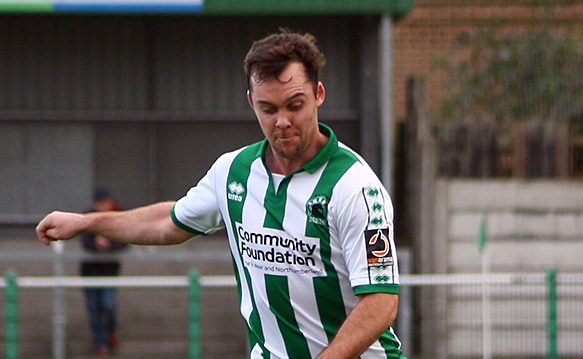 Blyth Spartans are delighted to announce that Michael Liddle has decided to extend his stay at Croft Park until 2020.

The 29-year-old’s contract was due for renewal at the end of this season and Alun Armstrong has worked quickly to extend the defender’s contract.

The former Sunderland Academy graduate has made 98 appearances in his Blyth Spartans career to date, notching three goals and is over the moon to be continuing his career at the club.

“I’m very happy, very happy, what a great place it is to be, you wouldn’t want to play anywhere else would you?

“It’s a great place, great people, great lads. It’s perfect for me for both football and non-football reasons, you have to enjoy being where you are or it’s pointless and I love playing here.

Liddle has been an ever present in the 13-game unbeaten run that has ignited Spartans season in both the league and the FA Trophy. The triple award winner at the end of season awards has made 25 appearances, scoring once against Lancaster City:

“The gaffer has been saying all season we’ve had this type of run in us, and the camaraderie in the dressing is a huge part to why we have picked up our form.

“I don’t think a team could go on a run like we have with out having the closeness between them, everyone in there would work their socks off for one another and that’s the key to the success over the last two months.”

Now ‘Lidz’ has his eyes firmly set on the rest of the season as he approaches another landmark in a green and white shirt.

“I didn’t even realise,” commented Liddle as he approaches 100 games for Blyth, “I literally just saw that the other day, I saw on twitter that Pete (Jameson) had made his 75th and I thought I’d take a look at how I was doing.

“It’s crazy as it feels like I’ve not been here that long but thinking about it it’s probably the only place I’ve got close to playing 100 games.

“I’m quite proud of the achievement, I couldn’t have done it at a better place.”