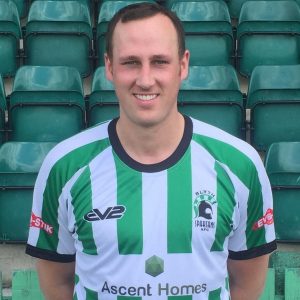 Assistant manager Neal Hooks was unable to hide his hurt after watching Blyth Spartans get knocked out of this season’s Emirates FA Cup – following a comprehensive 4-2 defeat to FA Vase holders Morpeth Town.

The Northern League raced to a commanding 3-0 lead within the first 17 minutes, thanks to a brace from Michael Chilton and Luke Carr’s curling effort. Daniel Maguire’s header and an own goal from former Spartans defender Chris Swailes saw Blyth claw their way back into the tie late on.

However, after throwing everything at the visitors to try and force a replay, Spartans’ management team could only watch on as Morpeth raced up the other end in the final minute and finally deliver the knockout blow through substitute Liam Henderson.

While Hooks admitted that Morpeth were excellent on the day, he didn’t pull any punches of his own when discussing Spartans’ shortcomings in Saturday’s Emirates FA Cup loss.

Hooks said: “The result was very, very disappointing. It was more so the manner in which we lost the game, rather than Morpeth breaking us down and playing good football – which they did at times and I thought they were excellent.

“We just didn’t look like we wanted it and that was the most disappointing part of it all. I think the players know they’ve done wrong, so we don’t need to beat on about it all the time.

“Hopefully, on Tuesday, we can put things right and start kicking on again in the league. Our ultimate goal is to get promoted, so let’s just concentrate on that.”

While many expected a close contest from the two local sides, no one inside Croft Park would have seen the away side stroll to a 3-0 lead before Blyth even got out of the blocks. Hooks went on to say that the loss has hit home hard with the Blyth team, no more so than because it now hands the local bragging rights to a number of Morpeth players – after they took full advantage of their host’s poor defending.

Spartans’ assistant manager added: “It’s always disappointing to go out of the competition, whether it’s against a higher side or a lower league side than ourselves. I think the worst part for our lads is that they all know a lot of the lads in the Morpeth changing room.

“Like I said to them before the game, it’s always nice to have bragging rights over the lads that you know – as you do bump into them on nights out and in the bars etc.

“Unfortunately for us though, it’s Morpeth that now have those bragging rights.

“We had the kick-off, so we could have pegged them back early and started to play our football. Credit to Morpeth though – as they pegged us back instead and I thought some of defending was questionable.

“They punished our bad defending, so to concede three early on was a real sucker-punch.”

Despite the terrible start to the tie, Blyth were able to drag themselves back into the game in the second half and were unlucky not to force a replay before Henderson’s late strike. However, Hooks was pleased to see that his side didn’t throw in the towel when they were left stunned in the opening rounds and the changes that Blyth made were able to at least give them a chance.

He said: “We shouldn’t have been in that position to start with, but it’s good to see that the lads do have a bit of fight in them. They could easily have folded and let the score go out even further.

“Tom and I had a chat and we decided to make a couple of positive changes to try and go for the game. We couldn’t just sit back and hope the lads would do that.

“We made a couple of attacking changes and the lads that came on worked hard. We had to throw the kitchen sink at it and we got in sight of the three-goal lead that they had, but it just wasn’t enough at the end.

“We might have been able to comeback from a two-goal deficit, but three was just too much in the end.”

As is often the case in Non-League, games come thick and fast so Spartans don’t have much time to dwell on their devastating Emirates FA Cup defeat – as they return to Evo-Stik Premier League action when they travel to bottom club Frickley Athletic.

With Frickley having claimed just one point so far this season – as well as succumbing to a 3-1 loss to Blyth already in the previous round of the Emirates FA Cup – Hooks still think that Spartans will travel to Yorkshire looking to right the wrongs of this weekend and maintain their great start to the season against the league’s bottom side.

Hooks explained: “We’re still confident of getting a result at Frickley. It a case where, hopefully, this result gets a bit of a reaction from us and we get the positive one that we’re looking for.

“We might have to make a few changes, freshen things up and give some of the other lads an opportunity. Hopefully though, we get the right reaction and we get back on track with the league.

“As I say, our main focus is the league. It would have been nice to go on another cup run, but that’s gone now and we just have to put our focus back on the league straight away.

“Both myself and Tom want to win promotion. If you asked us if we wanted to win the league then that would be great, but we’re not fussed as long as we get promoted.

“That’s certainly the goal for the lads in the dressing room as well. I think, after the disappointment of last season, that all of the players at the club want to go one further this season and complete the job.

“We’re in a good position so far this season, but there’s still a long way to go. We need to see a lot better performances than what we managed against Morpeth though.”