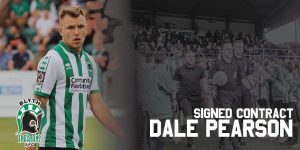 Blyth Spartans can announce that forward Dale Pearson has signed a contract with the club.

The 24-year-old was one of Lee Clark’s first signings, joining from Newcastle Benfield on a league registration deal, but the potent forward has impressed during pre-season and earned himself a contract at Croft Park.

The former Ashington, Morpeth Town and West Allotment Celtic striker netted twice in Blyth’s 3-0 win over North Shields on Tuesday night and was pleased with the form he had shown to date:

“The whole team has just gelled really well. With only five players being here from last season, obviously it has taken a bit of time to gel together but I think it’s coming along nicely.

“Hopefully by the time the season starts, we’ll have that chemistry and be able to hit the ground running.”

The striker has formed good partnerships with fellow forwards Scott Fenwick and Michael Sweet and believes they’ll only get better as a unit:

“Scotty is good to play off, he’s got a lot of experience. He’s a big strong lad so hopefully as time goes on we can score plenty of goals.

“Sweety has scored for fun everywhere he has been, I believe as a unit we’ve got all the characteristics to keep the fans entertained this season.”